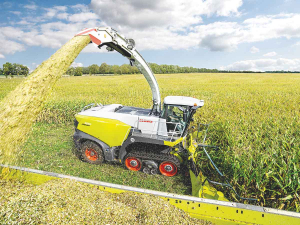 “With three decades of experience with tracked machinery and its new application to Jaguar is going to change forage harvesting,” says CLAAS Harvest Centre product manager Luke Wheeler. “The pivoting mounting system allows the machine to be operated in even the most difficult conditions.”

The design layout means track units can oscillate upwards by 10 degrees and downwards by 13 degrees, with a headland protection system incorporated to protect pastures. During turning, the support rollers in each unit are pushed down hydraulically, while the front drive roller is raised. This effectively reduces the contact area by a third, reducing damage to the grass cover.

TERRA TRAC, fitted with the 635 mm tracks offers an external width of just 3m and allows a road speed of up to 40km/h. While the extended wheelbase results in a larger maintenance compartment and better accessibility.

Of particular note, the 970 now has a 16-litre, six-cylinder MAN D4276 engine that delivers 790 hp. This offers a displacement of nearly three litres per cylinder, said to promise a stable power curve with sustained torque and the lowest fuel consumption per tonne of harvested material in its class.

The layout sees up to seven commonly used settings being able to be programmed as favourites and accessed by the rocker switches on the CMOTION control lever.

Other improvements include the addition of the award-winning CEMOS AUTO PERFORMANCE system, which regulates engine power and driving speed according to harvesting conditions.

The 990, 980 and 970 can be equipped with the new V-MAX 42 drum, offering a cutting frequency of 25,200 cuts per minute. This means by using the full engine output, the machines can provide top-quality chopped material at short lengths of cut from 3.5 to 12.5 mm.

CLAAS has released another two new maize front attachments for its Jaguar harvesters.

With a working width of 6 m, the new ORBIS 600 is equipped with large-diameter discs and is ideal for use in medium to tall maize crops. Meanwhile, the ORBIS 450 has a 4.5m working width and rounds out the lower end of the range.

All models have the proven ‘V-shaped’ crop flow for optimal reliability, especially in variable harvesting conditions. They also feature newly designed fingers ahead of the knives to reduce crop losses and points which can be removed for harvesting laid maize.

A new tilting frame concept ensures a centred feed of the crop to the Jaguar’s pre-compression rollers, which – depending on field conditions – allows the mounting angle of the tilting frame can be set to two different positions. For example, in wet conditions, the cutting angle of the front attachment can be maintained even if the front wheels of the forage harvester sink into the soil.

Visitors to last week's National Fieldays were able to check out the new home for CLAAS Harvest Centre, Waikato and the parts, training and demonstration hub for the network's five other branches in the North Island.

After giving the go-ahead for a major investment at its Le Mans plant back in 2017, Claas recently showcased its €40 million spend.

The CLAAS Harvest Centre display at Mystery Creek will include the public debut of the all-new CLAAS Disco 10 series side-mounted rear mowers.