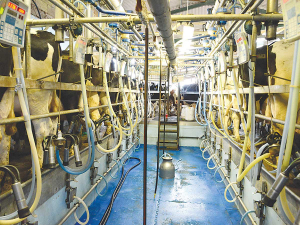 Drenching is used to balance the diet of dairy cows and to provide protection against metabolic and other illnesses.

Drenching is used to balance the diet of dairy cows and to provide protection against metabolic and other illnesses. Products commonly administered include bloat preventatives, magnesium, zinc to support metabolic processes and trace elements including cobalt and selenium.

Advantages of drenching in the milking routine include being effective with any soluble or insoluble product, being economical with very little wastage and being reliable and accurate – each cow receives an accurate amount and no cow misses out. It’s also easier to carry out in herringbones.

However, there are some disadvantages: the drenching process can add time to the milking routine, cows require training and it is difficult to carry out in rotary dairies.

As new technologies are developed drenching cows during milking is becoming less common. Alternative technologies include:

spreading as a dust on to pasture or silage

adding to supplementary feed in troughs or in the bail

To drench during milking, DairyNZ recommends you to wait until the cow lifts her head, then put the nozzle into the side of the cow’s mouth and release the trigger.

“The milker may, but usually does not, need to control the cows’ movement by placing a hand over her muzzle. Drenching should take 3-4 sec/cow,” it says.

The coiled drench line takes the spray nozzle back to the bail area entry end, ready to be picked up again for the next time this row is drenched.

With a conventional milking routine, both milkers change clusters from exit end to yard end.

Then one milker goes up to drench the cows from yard end to exit end. In contrast to the single operator herringbone, they do this on the side with the clusters on.

The other milker remains in the pit replacing any cluster that falls during drenching, changing clusters on any slow-milking cows, completing the teat spraying, and releasing and replacing the milked row of cows.

By the time that row is out and the new row is in position, the drencher will be back down in the pit ready to start changing clusters again. With this routine there is virtually no time added to the milking routine, the drencher using what would otherwise be almost ‘waste’ time.

At the end of a row the drench gun and hose can be flicked back to the yard end again by a coiled spring hose or attached to ‘carriages’ hung on wires on both sides of the bail area and connected to each other by a long cord that returns each gun to its start position automatically.

With larger rotaries the drencher usually stays up on a walkway in front of the cows throughout the milking, keeping well away from the entrance to avoid disrupting cow flow on the platform.

The drench hose is suspended from the roof.