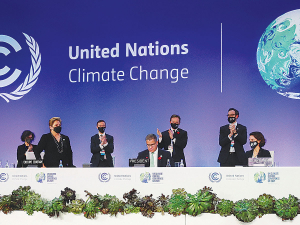 New Zealand joined with more than 105 countries to launch the Global Methane Pledge at COP26 in Glasgow five months ago.

The aim of the agreement is to have a stronger response to the danger of climate change; it seeks to enhance the implementation of the United Nations Framework Convention on Climate Change through:

(b) Increasing the ability to adapt to the adverse impacts of climate change and foster climate resilience and low greenhouse gas emissions development, in a manner that does not threaten food production;

The Minister for Climate Change James Shaw at the COP 26 conference in Glasgow said there was now new methane cuts involved in joining global pledge, but the Government's primary tool to reduce agricultural methane is a pricing scheme slated to take effect in 2025, in a partnership with the farming industry, called He Waka Eke Noa. It creates a system to measure and price on-farm emissions.

My question to this government and other governments around the world twisting words to limit food production to achieve an unsustainable goal while making a food shortage for the world; why are they not taking into account Article 2 (b) of the Paris Accord?

Why aren't DairyNZ, Beef+Lamb, and other sectors saying to the respective governments and ministries to take notice of article 2 (b) of the Paris Accord?

New Zealand produces and exports enough food to feed 40 million people and we are acknowledged worldwide as one of the most environmentally secure producers around the globe.

If we reduce our production then the shortfall from such reductions will be taken up by other countries that may not have the same environmental standards and this may not only have an effect on food supplies for other countries but also may cause an overall global increase in GHG emissions.

Our sector representative bodies such as DairyNZ, Beef + Lamb, and other sectors should be lobby government and the individual ministries to take notice of article 2 (b) of the Paris Accord and protect our ability to produce food?

What COP26 means for co-op

Fonterra's Amsterdam-based trade strategy and stakeholder affairs manager, Mark Casey, recently attended COP26 - the annual United Nations Convention on Climate in Glasgow. Here are his thoughts on this globally significant event and what it means for the Co-op.

OPINION: Climate Change Minister James Shaw should gainfully spend his time in MIQ - following his attendance at the recent COP26 in Glasgow - getting his head around how to better promote NZ's world leading split gas approach.

OPINION: So the 'COP26' climate talkfest in Glasgow got off to a strong start by declaring yet another 'climate emergency', starting as they meant to go on - by blowing hot air. Empty pledges, and attacks on farmers, followed.

DairyNZ says the sector is committed to playing its part to reduce global methane levels by 30% by 2030.