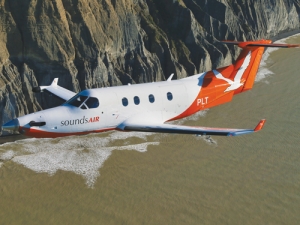 A short roundup of what's happening in the world of New Zealand wine.

Rosé set to be summer drink

New Zealand wine and lifestyle website Sip NZ Wine is launching a Rosé campaign in February, joining forces with industry producers to make a rumble about Rosé. Already more than 15 producers are on board for the Dare to Pink #sipnzrosé with the aim of making the variety the drink of summer. Emily Camblin from Sip NZ Wine says; "Australia, Europe and the US all have their own Rosé campaigns so it is finally time for New Zealanders to Dare To Pink."

A group of bronze cattle are adding to the ambience of Craggy Range's Giants winery and vineyard in the rural Tukituki valley in Hawke's Bay.

The sculptures of Charolais cattle - a bull, a cow and a calf - are double life-size and are the work of Paul Day, the first created by the British-born artist for a southern hemisphere site.

Day, who gained his B.A. Hons from the Cheltenham School of Art, specialises in figurative sculpture and has had his work exhibited in Europe, the USA and Canada. In 2001 he was chosen to create a monument in London commemorating the Battle of Britain.

Visiting Day's studio in Burgundy while touring the wine region last year, Craggy Range owners Terry and Mary Peabody commissioned the three works. The cattle sculptures are located at the front of the Craggy Range site, alongside a man-made lake and below the soaring Te Mata Peak.

Gimblett Gravels® reds are "the wave of the future for the world's great red wines" according to leading US wine commentator Dan Berger.

Following a tasting of 2013 Gimblett Gravels® wines in the US he applauded the district, saying; "To make utterly world-class red wines in a region three decades after you first joined a game already in progress is an astounding achievement-one that should be widely heralded."

Describing the wines as "food friendly...with complex aromas, varietal precision, and huge cellar potential", he added that the "sensational Syrahs from the area overwhelmed the tasters with their excitement and varietal integrity."

Awarded a Prime Minister's business scholarship, Craggy Range director of wine and viticulture Steve Smith ,(left), is one of 12 senior executive and business owners who will study at such internationally acclaimed education institutions as the Harvard Business School, INSEAD (The Business School for the World) and the London Business School. As well as helping them further their educational opportunities, the scholarships are aimed at assisting recipients wanting to develop valuable networks and a global mind set in their business dealings.

Participating wineries Abbey Cellars, Alpha Domus, Ash Ridge Wines, Ngatarawa, Paritua, Sileni Estates and Triangle Cellars will cater for up to 2000 participants, many of whom will take advantage of the hop on/hop off buses provided to travel around on the day.

The festival, aimed at promoting the subregion's cellar doors and sales, will be held from 10am to 6pm on 23rd January and will offer live music, wine tasting, gourmet food prepared on site and masterclasses.

Wairarapa's Gladstone Vineyard has further strengthened its association with the arts, becoming official wine sponsor of one of New Zealand's leading arts organisations, the Arts Foundation.

Colin Carruthers and Deborah Coddington's Te Muna Road Vineyard is now home to seven rows of Chenin Blanc at Redbank; 9 kms east of Martinborough. The new plantings include approximately 1000 vines. "The idea came about from Colin Carruthers after he had a recent trip to France because he was pretty taken with the Chenin Blancs that he tasted there," says winemaker Simon Groves, who anticipates making the first Redbank Estate Chenin Blanc in four to five years' time.

The Chenin Blanc vines have been planted on the top terrace at Redbank Estate, right next to the vineyard's Chardonnay vines (90% of which are the relatively new clone 548 with the balance planted in the unusually aromatic Chardonnay Musque clone).

For the first time, a direct flight between New Zealand's two largest wine regions is available.

Sounds Air, based in Blenheim, began their direct flights early November. Six times a week, there will be return flights between Blenheim and Napier, with the target audience being wine industry personnel. Sounds Air's Managing Director Andrew Crawford says the decision to create a link between the two centres was a direct result of inquiries from members of the wine industry.

"A lot of people had moaned to us that the wine industry was having trouble getting between the two regions," Andrew says. "So we got thinking. We had some spare capacity on some days and thought maybe we could offer a route that would solve the problem."

A shipment of Nautilus 2012 Pinot Noir is on its way to the UK, to be served in British Airways business class. It is 15 years since the company delivered their first Pinot vintage, so this latest accolade is something the entire team is excited about says Managing Director Clive Weston.

"Our first vintage of Nautilus Pinot Noir was back in 1997, so the British Airwars listing is a pleasant reward for over 15 years toil in vineyards and at the winery, with this most fickle but delicious variety.

Wine Brokers NZ, one of the industry's leading wine broking companies, has been sold. Former owners George Elworthy and Karen Griffiths have sold their business to George Geris, previously Chief Marlborough Winemaker and Winery Manager for the Villa Maria Group. George Elworthy says while it is sad to sell the business they started, he is thrilled to be passing it on to someone who will realise its potential. "I have no doubt that with George's knowledge, experience and professionalism, he is the right person to do this."

Gerris says he has admired the business for years.

"I understand the fluctuations of the industry and the challenges of balancing supply and demand which puts pressure on wineries, growers and buyers both locally and internationally. I am looking forward to working with everyone to help make their lives easier by taking some of those problems away."

Time for lime to shine

New Zealand's lime industry is pointing to the benefits of locally extracted product to help farmers deal with huge increases in fertiliser prices.

NZW's 2021 Fellows: Steve Smith - for service to NZW, WINZ and other initiatives

Wild Billy McRae was known for bootlegged whiskey out of Southland, with Hokonui Moonshine said to be Scotland's best.

A Picton predator free project has teamed up with a Marlborough winery to help bring bird song back to the Sounds.