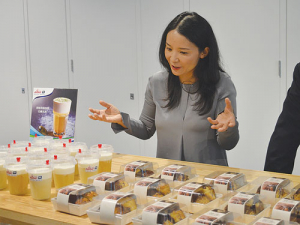 Exactly five years ago Fonterra launched its first Anchor milk product in China, today it is sold in 13,000 stores in 220 Chinese cities.

A 250ml Anchor UHT milk produced at the Waitoa site went on a retailer’s shelf in Shanghai. This was followed by a joint online and offline push into the China market and today Anchor is the number-one consumer milk brand.

Anchor UHT milk is also the online bestseller in China with 55% of total sales made online.

Zhu says the 45% vs 55% offline/online sales mix is working well.

“A lot of fast moving consumer goods (FMCG) companies would kill for this mix in China,” she says.

Cumulatively 1 billion glasses of milk have been sold by Anchor in China since its launch.

Zhu says fighting for market share isn’t easy with 64 imported milk brands in China, but Anchor is proud to be retaining the number-one spot. Anchor sales have grown 40% year-to-year, not easy from a small base. She adds many FMCG companies are not growing in China.

“Some of the global FMCG brands are declining in China; the 40% plus growth is huge; in fact it makes a lot of people very jealous of us in China.”

Zhu pays tribute to her workforce; volume per person has increased seven times since 2014. “Things don’t fly off the shelf; in China it requires a lot of hard work.”

From day one e-commerce has been part of Anchor milk’s strategy and ‘genetics’ in China. Fonterra works with China’s two giant e-commerce retailers Alibaba and JD.com.

Fonterra is pondering building plants in China for processing milk from its farms there.

““We have farms, we have a big downstream business and we need manufacturing capability. Right now, it’s done at a few carefully audited third-party sites and we have Fonterra people working on these sites fulltime to make sure the products are safe,” she said.

“There is a natural cap on how much you can do through third parties, so we’re assessing all the options, but we’re not in a position to say a definite timeline or make a commitment at this point.”

Fonterra’s greater-China sales are at least $5 billion; foodservice and ingredients make the most. But China farms have bled money over the years and Fonterra’s investment in food company Beingmate has turned sour.

Zhu says Beingmate gets a lot of attention but is a very small part of the total China business. “We are obviously disappointed; the business is not where we want it to be. But we are working closely with the new general manager to turn it around.”