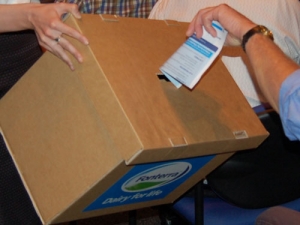 Eight Fonterra Shareholders Council members have been returned unopposed for another three-year term.

However, an election is required in four seats.

For the Eastern Bay of Plenty, Gerard van Beek and Wilson James will battle it out. Northern Taranaki is also a two-way battle between Mark Hooper and Kevin Turnbull.

Nominations for the elections closed yesterday.

The candidates for the Fonterra board of directors' election will be announced on Tuesday, 13 October 2015 following the completion of the Candidate Assessment Panel (CAP) process.

The returning officer, Warwick Lampp, confirmed there will be no election required for the Directors' Remuneration Committee, as shareholders David Gasquoine and Stephen Silcock have been elected unopposed.

The voting period is from Friday, 30 October until 10.30am on Monday, 23 November 2015 with the results being announced later that day. Fonterra's annual meeting will be held at Waitoa on November 25.