Milk, cow peaks ‘not yet seen’ 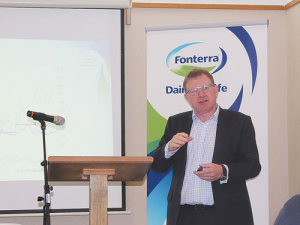 “Nor, I hope, have we have reached peak cow,” he told the Jersey NZ conference in Whangarei last week.

“I am very pleased to hear [our political leaders’] language has changed over the last six months,” Wilson says. But he warns the industry that its growth will be much less than during the last 20 years.

There is much more talk now about the impact of nutrients in certain catchments, he says.

“There is no doubt that we all want to improve our waterways, and that in some catchments waterways are under more pressure than others.

“That is why Fonterra committed to the 50 catchments initiative which is collecting data -- alongside DairyNZ and NIWA and others -- to be able to make informed decisions and be able to support decisions being made in those catchments already.”

In some areas farming practices will have to change “quite dramatically” to lower the nutrient loadings, and in other areas there is less impact.

The problem at the moment is they are playing catch-up, Wilson says.

“Many of you are starting to see the science emerging; new initiatives emerging which will provide solutions for us.

“It feels we are still a bit behind [with] true breakthrough technologies here, but I believe they will come based on what I have seen.

“Some areas are going to be a lot harder than others to truly lower the impact in certain waterways.”

And we will get much less growth than has been achieved in NZ dairy during the last 20 years, Wilson says.

“There is a one-in-20-year change going on at the moment. As good farmers, you have had access to capital and access to land for growth.

“We know that because of banking changes it is harder for many farmers to attract capital into their businesses currently; this could well change again -- we have seen both cycles before.

“But certainly we see we are having to change farming practices and there is less land available for conversion and change than in the past.

“So we are forecasting much lower growth going forward; we see ourselves carefully using our innovations, our technologies that we use in NZ, and our other milk globally, to support our customer demand.

“And remember we have had to build significant plants and capacity because we have had a requirement under legislation to do so: the moment a farmer gets a twinkle in his eye about producing more milk we have had to put a plant there for them.

“We think the times of building scale ingredients plants has probably changed to a focus on food service and consumer plants that are truly market driven. That is what you have seen over the last 24 months or so.”

Wilson believes the NZ dairy industry will continue to see milk growth but it will be slower. He has no doubt ways will be found to adapt our farming systems.