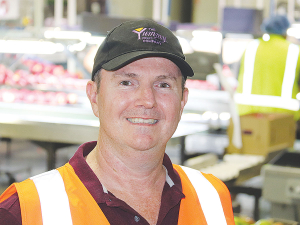 Paul Paynter says it has been a very challenging season, due to a combination of factors - including weather, Covid and labour shortages.

Paul Paynter says it's been another very challenging season, due to a combination of factors, including weather, Covid and labour shortages yet again.

In terms of labour, two years ago Paynter had 130 backpackers working for him - last year it was just 18 and this year none!

He says adding to the worker issues is the fact that Covid has been bubbling away in the community and it has taken a lot of people out of the workforce. On top of that, wet weather has played havoc with picking fruit.

Paynter told Hort News in the first quarter of this year they've had a record 440mm of rain - 50mm higher than the previous record.

"As a result, it's become a quagmire in the orchards and I have got a guy working full time just trying to repair tracks to keep things functional out there," he explains. "But I think we are going to get most of the crop picked."

The other issue that plays constantly on Paynter's mind is shipping and getting product to market. He says shipping is unreliable and boats seem to come and then seemingly evaporate as if they were in the Bermuda Triangle.

Somewhat fortuitously, this hasn't been a problem for him just yet. Paynter says in February last year they shipped $1.4 million worth of fruit; this year it's been a mere $66,000. He says this is because the packhouses are only operating at about 60% capacity due to labour shortages. However, he believes this situation will improve in a few weeks' time when picking ends and people are deployed in the packhouses.

"My expectation is that the season will continue to be volatile and traumatic," Paynter says.

"It's been very tough on people after a couple of years of Covid and everyone's emotional shock absorbers are worn, just like many other New Zealanders. They aren't having fun anymore and they are worn out trying to do their job with too few resources and in very challenging times."

Paynter says people will struggle on in the hope there is light at the end of the tunnel and before long the world will return to some sense of normality.

Tauranga orchardist Graham Dyer and wife Mavis bring five workers from Vanuatu every year, since 2007, to work on their family kiwifruit orchardists.

The horticulture and winegrowing sector will have access to an additional 1,600 more workers this season after the Government agreed to increase the Recognised Seasonal Employment Scheme (RSE) cap to 16,000.