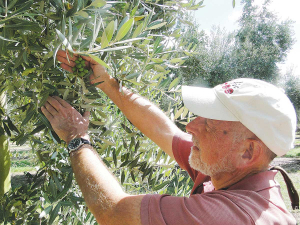 That’s the findings of a three-year research project commissioned by Olives New Zealand.

The project aimed to increase yield – typically less than 10kg per tree – to 15kg.

But it exceeded expectations, achieving yields of 20-35kg per tree.

The project, supported by the Ministry for Primary Industries (MPI) through its Sustainable Farming Fund, brought together Dr Stuart Tustin, a Plant & Food Research fruit tree physiologist, and Andrew Taylor, an olive industry consultant – both of whom have extensive knowledge in stone, apple and pear culture.

They suggested applying the methods that work for stone fruit crops, including more aggressive pruning, a proactive spraying programme every 21 days, and thinning crops after the fruit has set to mitigate biennial bearing (in which light and heavy crops tend to alternate year on year).

“The trees were getting out of control – they grow too well in New Zealand, making harvesting a challenge,” Sheridan said.

“NZ’s olive trees don’t have problems with pests. Our biggest issue is the trees getting diseases – such as peacock spot, cercospora and anthracnose – due to our often rainy climate, which requires a different approach.”

New Zealand has about 300 productive olive groves, encompassing more than 2000 ha. The main growing regions are on the east coast from Northland to Canterbury, as well as Kapiti and Central Otago.

The project trialled Tustin and Taylor’s recommended techniques on five olive groves, one in each major growing region. The results, even after the first year, were so dramatic that the growers hosting the trials insisted on extending the methods to their entire groves.

“We had to compare our results to the typical regional averages as we couldn’t persuade our trial growers to keep their control sites,” Sheridan told Hort News.

“Once diseases began to be controlled, we found we were able to grow large clusters of olives for the first time – like bunches of grapes. In addition, feedback from international visitors has been outstanding, with visitors commenting that they’ve never seen such healthy olive trees,” she added.

“Earlier this year, we were visited by an olive tree specialist from Australia who was writing a book on olive pests and disease. But we couldn’t find any diseased olive trees for her to photograph.”

Olives New Zealand has now received funding for another three-year project aiming to increase production even further, by another 5kg per tree.

That project will include revised harvesting methods, and it will also trial organic production methods.

“Many small growers don’t have the right equipment to undertake spraying and don’t want to spend the money on it, and others don’t wish to spray so intensively,” Sheridan said.

“Part of our research will include experimenting with a programme for disease control using organic principles based on apple orchards. This will include the use of organic sprays.”

Steve Penno, director investment programmes at MPI, said it is delighted with the outcomes of the initial project.

“This project has over-delivered on its goals and is already making a huge difference to the olive industry in this country. We look forward to the results from the next three years of research, supported by our SFF Futures fund.”

The good oil on olives

The New Zealand olive oil market is estimated at 4.5million litres, worth about $35 million.

However, more than 90% of the oil sold here is imported, mainly from Europe.

Consumer research indicates that New Zealanders have a strong preference for local products. However, they are resistant to the pricing of New Zealand olive oil – which typically ranges from $20 to $50 a litre. European oil can sell for less than $10 a litre.

Now is the time for you to set yourself up for a career in horticulture, explains Peter Kemp, Head of…