Electric power for the orchard 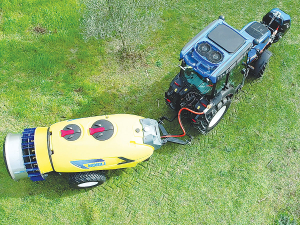 Nobili has produced what is believed to be the world's first 100% electrically-operated crop sprayer aimed at orchards and vineyards.

While the auto industry seems to be galloping into electrification, the agricultural sector seems to be a little more reserved in adopting plug in and play.

However, the recent EIMA Show in Bologna saw Italian manufacturer Nobili give visitors to its site a taste of where things might be heading - displaying what is believed to be the world's first 100% electically-operated crop sprayer aimed at orchards and vineyards.

It takes 700v DC electrical power from the CNHI-developed E-Source generator, which was shown mounted to a New Holland T4-110V tractor.

Comprising a fairly standard chassis, the sprayer features a 1000 litre spray tank and a 5 litre clean water tank. It has an ISOBUS control taking care of two electric motors - one powering the spray pump, while the second is dedicated to a patented fan arrangement. The latter offers fan speed and flow adjustment controlled from the driver's seat.

The company also displayed its E-Mulcher, again electrically-powered, for dealing with vegetation in orchards or vineyards. This machine has a novel feature, with its driveline maintaining a constant rotor speed, irrespective of changing crop of terrain.

Offering 100 litres capacity, with a 5 litre freshwater tank, the unit produces a fine droplet/atomiser spray pattern. Meanwhile, its integral componetry includes a battery box, charging socket and an aquatec pump that delivers up to 5 litres per minute open flow.