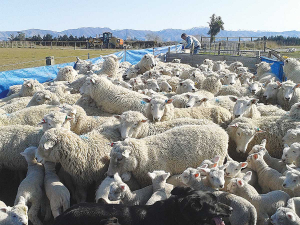 Scabby mouth is common and the infection rate in some sheep flocks can be as high as 90%.

It mostly affects lambs and can cause significant loss in growth potential of lambs and hoggets due to the reduction in suckling and grazing.

The disease is caused by a virus which can remain viable in the scab material for some time, although it is broken down by environmental conditions such as rain or UV light.

Trauma to the skin aids the establishment of the disease and this is where the scabs or lesions will form. Causes of trauma include grazing around thistles or matagouri, erupting teeth, and head butting through fighting. The lesions are commonly found in the following locations:

It can also be more generalised and cover the animal's entire head, muzzle and ears. The lesions generally cure by themselves within a few weeks of infection, as long as there is no secondary bacterial infection. After an initial infection, sheep will usually develop immunity lasting several months.

However, if the lesions become infected via a secondary bacterial infection the following treatments are recommended:

In most outbreaks it is often too late to prevent the spread of the disease through the flock. Vaccination usually proves effective in preventing infection. The vaccines consist of a live strain of the virus, so it is important that farms have already been identified as previous carriers of the disease.

The vaccine provides immunity for approximately eight months, although it appears that the constant environmental challenge further strengthens the sheep's protective immunity to this disease. It's also a good idea to reduce the risk of trauma to your animals:

A single vaccination does is usually given to lambs at docking/tailing time, via a wire applicator, which is scratched firmly across the skin. This is usually done inside the thigh or armpit of the lamb. This site is chosen because it has little to no wool cover and the lamb is unable to lick the vaccine site and become infected.

It is important not to scratch so deeply as to cause bleeding, as this could carry the vaccine away from the body and render it ineffective. Check the applicator needles regularly - they can become clogged with grease and dirt and deliver an incorrect or reduced dose of vacicne.

Take care when vaccinating. Because the vaccine is a live strain, self-injection with the applicator will transmit the disease to humans. The vaccine should also be handled carefully to keep it viable. Antiseptics or fly strike spray used at the same time may inactivate the vaccine.

A scab should form at the innoculation site. Test the effectiveness of vaccines by checking approximately 20 lambs five to seven days later, to ensure a scab has formed and the vaccine has taken.

Scabby mouth a scourge, but treatable