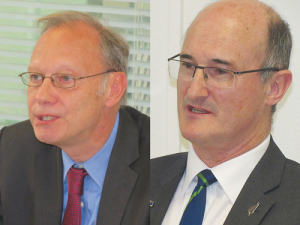 Agriculture is the challenge to New Zealand in its quest to achieve a quality comprehensive free trade agreement (FTA) with the European Union (EU).

This would include general trade and geographic indicators (GIs), where the name of a product, e.g. Gouda cheese, is linked to a specific region.

Thirty EU negotiators last week visited Wellington for the second round of talks with their NZ counterparts. The two sides held a public briefing on the talks, with representatives of all the major agri trading organisations present among about 100 people who attended.

While both sides talked up the prospect of an agreement and spoke of the positive nature of the talks so far, the word ‘agriculture’ was clearly in the too-hard basket.

The lead negotiator for the EU, Peter Berz, told Rural News that agriculture is “sensitive” because farmers in the EU are worried about the impact of NZ exports of sheepmeat, beef and dairy products.

Berz says attitudes in Europe to NZ exports have not changed since Britain entered the EU in the 1970s.

But he is pleased with the talks so far, and notes a positive spirit at the negotiating table due to the time taken in preparation.

“It took a year to get a mandate from the EU member states and clearly agricultural trade and GIs was a big issue for many of them.”

He says the goal is to have a sustainable, high-quality FTA which benefits consumers and producers and takes into account labour rights.

NZ’s lead negotiator, Martin Harvey, is also pleased with the talks progress, saying that NZ, like the EU, wants a comprehensive, ambitious and sustainable FTA. He wants to see tariffs go, but says the perception of some agricultural groups in Europe is out of keeping with the reality of the situation.

“I think they have an inflated view of just how present we are in the market already. Markets for products like beef and dairy in the European Union are very small,” Harvey said.

“They don’t appreciate how well we are integrated in markets globally, including the Asia Pacific area, and how committed we are to all these markets.

“We are not going to put all our eggs in one basket; we are never going to flood their market with products. We want to increase our trade, but it will still be modest in the overall markets we enjoy, so this is really an evidential issue and one that we will be working on with our counterparts.”

Harvey says while the issue of agriculture, including geographic indicators, is sensitive and challenging in negotiating the FTA, he’s keen that these don’t get left until the end.

Even if they are difficult he’d like all elements of the negotiation to move “in parallel,” he says.

“We don’t want to come up against a cliff at the end of the day, so if we are moving forward on a broad front it means that people can meet each other’s expectations. It is much more likely to work and have a successful negotiation.”

Harvey says GIs and agricultural market access are in the same basket and for NZ to make progress on its side of the bargain it wants to see progress on the EU side. NZ has long questioned GIs and believes that if the EU takes a strong stance on this it would have a detrimental effect on NZ’s exports, especially cheese.

“But it’s fair to say that agricultural market access will still be there at the end and the tough issues will be amongst the last to be resolved,” Harvey says.

The next round of talks will be in Brussels.