Auckland signs up for BFEA 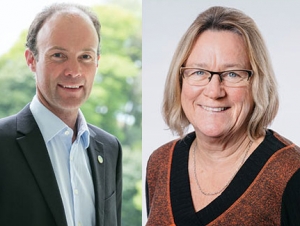 Awards-facilitator, the New Zealand Farm Environment (NZFE) Trust, has formed a partnership with Auckland Council to bring the highly successful competition to Auckland. The agreement means Auckland farmers and horticulturists are eligible to enter the 2016 Awards.

NZFE chair Simon Saunders says the trust is delighted to deliver the Farm Environment Awards to the region.

"Auckland is New Zealand's biggest urban market, but it's also home to a large and diverse agricultural region that encompasses dairying, sheep and beef farming, forestry, market gardening and horticulture. We are excited to welcome Auckland to the awards and we look forward to working with Auckland Council to showcase what farmers in the region are achieving in terms of environmental and economic sustainability. "

Auckland councillor Penny Webster, a former president of Auckland Federated Farmers, says bringing the awards to Auckland will be great for the region.

"I think it's very important that Auckland gets involved in a competition like this. Auckland's large rural constituency on both the northern and southern sides of the city is a very important part of the regional economy. Anything we can do to help farmers improve their environmental sustainability has to be good for the region."

Webster says the competition is also a good way for farmers to show urban Auckland that they take their environmental responsibilities very seriously.

Auckland region's northern boundary spans from South Head across to just south of Mangawhai, stretching out to Great Barrier Island. Its southern boundary encompasses Waiuku, Pukekohe and reaches across to the Firth of Thames.

The addition of Auckland brings the number of regions involved in the Ballance Farm Environment Awards (BFEA) to eleven.

Saunders says NZFE Trust's long-term strategy is to ensure that every farmer in New Zealand has the opportunity to enter the competition.

"Having Auckland on board is a huge step towards being able to offer a complete national programme. We are almost there now."

Saunders says all Auckland farmers, including orchardists, vegetable growers and viticulturists, are eligible to enter the competition.

Entrants receive valuable advice from competition judges on how to improve the sustainability of their businesses.

Information sharing is a key plank of the competition. "Farmers in the Auckland region will be able to share knowledge and experiences with farmers from the other regions involved in the awards."

The Supreme winner of the 2016 Auckland Ballance Farm Environment Awards (BFEA) will be honoured at NZFE's annual Sustainability Showcase next year. A National Winner is announced at this event, with the titleholder receiving the coveted Gordon Stephenson trophy.

Entries for the 2016 BFEA open on August 1, 2015. Entry forms are available on the New Zealand Farm Environment Trust website at www.bfea.org.nz