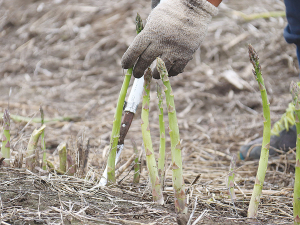 Currently asparagus picking is all by hand and it’s hard work.

Geoff Lewis and his family company grow about 100ha of asparagus on land just north of Levin.

They also have a dairy farm and grow strawberries. But it’s the asparagus that presents the biggest challenge in terms of harvesting the crop.

Lewis employs local people in his modern, high-tech packhouse. But he relies heavily on workers from the Pacific Islands who come every year to NZ under the Recognised Season Employer scheme (RSE).

Workers do the picking all by hand and it’s hard work. They are trained to select the asparagus spears that are ready for picking on a given day and leave the others for the following days.

“What a human is very good at doing is walking down a field and selecting those spears ready for harvest and leaving the smaller spears for tomorrow and the next day’s harvest,” he told Hort News.

“You can’t cut them all off at the same time because they don’t grow at the same rate and you risk destroying the whole crop.”

While RSE workers play a vital role in harvesting asparagus as they do other crops, Lewis says in the longer term these people may not be available as the economies of their own countries develop. At present, workers from the Pacific Islands under the RSE scheme make better money than they might earn at home. But he believes long term the writing is on the wall.

Australia employs workers from Asia and the Pacific, the United States uses Hispanic workers from Mexico and other places, while the UK relies on workers from Eastern Europe. The UK is now in a very difficult position with Brexit and the free flow of labour may dry up or be severely curtailed when Britain leaves the EU.

Lewis and other asparagus growers worldwide have been aware of this problem for several years.

“Over the last 20 years there have been many attempts at creating mechanical harvesting,” he explains. But these have generally not succeeded because of the need to select spears of a certain quality, size and length.

Lewis says they are now looking to combine the elements of camera technology – where a camera will picture the areas in front of the harvester and then through algorithms identify spears ready for harvest.

“Then a robotic device will go and cut those asparagus that the computer has identified for the harvest and put them into crates ready for shipping to the packhouse.”

Lewis says huge advances have occurred in vision technology over the years. The challenge is to get a camera to distinguish an asparagus spear from a piece of grass and then get it to do what a human does well -- pick the crop. Essentially it’s to get a machine to be decision maker.

The Lewis family has been at the forefront of innovation in this area. Geoff’s son Andrew is a robotics graduate from Canterbury University. About six years ago, as part of his degree, he did a proof of concept for a mechanical harvester.

He’s since taken a job at Fonterra and the project has been taken on by the engineering department at Waikato University (see Hort News, September 2019).

Despite a lot of work on this project, it will be several years before a commercial asparagus harvester gets to market, Lewis says.

Labour supply and cost are the core of the problem for asparagus growers worldwide. For example, Lewis used to export lots of his product to Japan, but Mexico, Peru, Chile and the Philippines – where labour rates are low – are competing vigorously.