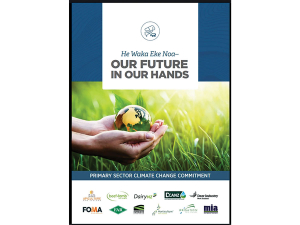 A Waikato-based agriculture and environment consultant says there is "very little" to agree with in the current HWEN proposals.

"I would say the original intent of HWEN was good, a collective approach to create pricing at the margins, as well as promoting uptake of new technologies and management," the Waikato based agriculture and environment consultant says.

"Unfortunately, it has been designed with major reductions of emissions in mind rather than trying to better understand our climate footprint and then set appropriate reductions from there."

Cranston says Groundswell is still working on its counter proposal. However, he hinted it will likely be based on data collection, best practice management and improved research into carbon sequestration rates.

"Some form of pricing or credits trading are likely required to ensure fairness and that we remain on course - around 2025/26," he added. "Farmers should have genuine input on how this works - so we won't be defining that now."

Cranston is hopeful Groundswell's alternative will allow the NZ farming sector to certify climate neutrality by 2030.

"We plan to socialise our proposal with other political parties so, farmers have a credible alternative with the election in two years."

He says Groundswell believes that any emissions scheme should be designed to promote NZ farming's low climate impact to consumers - not just reduce emissions.

Rural News understands that Groundswell recently had a Zoom meeting with HWEN to discuss its farmer survey results and suggest changes.

Rural ginger group Groundswell is mounting another campaign - this time against the He Waka Eke Noa (HWEN) proposals that farmers are being consulted on this month.

Have farmers been sold out?

OPINION: With the emissions pricing options now out for discussion, the fear campaign has begun in earnest.