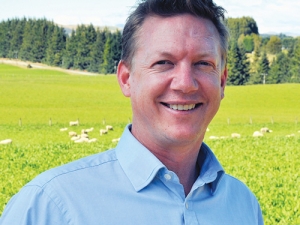 Deer milking, manuka honey, sheep milking and blueberries are among Landcorp's options for land it had planned to convert to dairy farms.

The state farmer confirmed last week it was revising its land use at the Wairakei Estate, near Taupo. It has signalled it wants to reduce its dependence on dairying there, part of the Upper Waikato catchment regarded as 'sensitive'.

The decision to downscale follows detailed review and discussions with its partner in the development, Wairakei Pastoral.

Landcorp is already running a pilot sheep milking operation on the land and is talking of doubling and possibly trebling this.

Chief executive Steven Carden says the company will continue its dairy farming but not on the scale originally planned. It will run its dairy support operation on the estate and not move cows to other farms.

Carden says the strategy is to connect the food they produce on their farms with high spending consumers worldwide, offering them produce bearing its new Pamu brand. This requires exceeding consumers' expectations about how that food is produced, for example in the standard of care for animals, the people who work on the farm and the environmental impact of producing that food.

"Landcorp's new direction includes a focus on developing new products such as sheep milk. These are niche and premium, and require new farm systems that meet growing consumer expectations of their food," Carden told Rural News. "We would like the Wairakei Estate to become the centre of such innovation as Landcorp looks to expand in these new areas."

He says the company would like to produce a 'basket' of different high-value foods and is scrutinising consumer trends and the latest information on nutrition as a precursor to developing new products.

Carden says emerging trends suggest that meat may become a secondary part of a meal and Landcorp will look to see what this might mean for the business. But animals will remain at its core.

Carden says an environmental reference group Landcorp set up to provide it advice has played a part in the decisionmaking process. The business had already been moving in that direction and the reference group helped reinforce its thoughts.

Landcorp also plans to build covered stand-off areas on the Wairakei Estate for wintering cows, to protect them and pasture and to produce year-round milk for its customers.

"This will also protect against over-grazing in the summer, improve the survivability of pastures, provide shade for cows and ensure we can capture more nutrients at key times of the year by preventing it from leaching into waterways," Carden says.

When the project began there was not the same awareness and knowledge as now of environmental impacts.

"We're acutely aware that we do not want to create any legacy issues for sensitive water catchments in the communities we operate in, anywhere around the country," he says. "The expectations that consumers and the public in general have about
how their food is produced are changing quickly, so we need to continually rethink our farming practices to keep up with them."