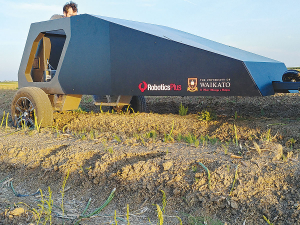 The automated asparagus harvester in action.

The harvester project started in 2015 and is now well advanced.

The harvest season starts in mid September in the key regions of Waikato, Hawkes Bay and Horowhenua, hits a peak during October-November and is over by late December.

Crops are picked daily, meaning skilled labour is in high demand for a relatively short time.

A recent report by the NZ Asparagus Council (NZAC) says sourcing and managing labour is one of the top three demands on growers.

So the development of a more highly automated harvester was welcomed by the NZAC at its recent annual meeting. The council endorsed a University of Waikato project and voted to approve its funding application to the Government.

The harvester project started in 2015 when Dr Shen Hin Lin, a lecturer at the university, was seeking a worthwhile practical project. He met with Callaghan Innovation, then Geoff Lewis, of Tendertips, a Levin asparagus grower, to discuss practicalities.

Work began with Robotics Plus Ltd, and funding was granted by Callaghan Innovation to support a PhD student at Waikato.

A key challenge is machine selection of the asparagus spears: it needs to know where individual spears are located across the width of the harvester.
This task fell to PhD student Matthew Peebles, who developed a spear recognition system in real time, using a time of flight camera.

Several test rigs were constructed and used to collect data during the harvest at Tendertips, Boyd’s Farm in Hautapu, and the Kaimai Fresh operation.

Following these trials and talks with growers, technical officer Josh Barnett was brought onboard to construct a proof of concept harvester. This unit was designed to adopt the spear recognition system and to demonstrate a harvest concept based on cutting, picking and collection.

A proof of concept trial took place in May 2019 in California. The machine successfully located spears, cut them with an arm, then placed them in a collection bin.

“The technologies we are using see data from the time of flight camera delivering height and location information of the spears,” Hin Lin explains. “And the harvesting arm uses a motor encoder to approximate where to cut, based on the speed of the unit.”

The project had to overcome variables, such as sunny or cloudy conditions, that affect the visual system for spear location, or the problems of dealing with spears growing in clusters.

More testing is expected to lead to a fully autonomous harvester.