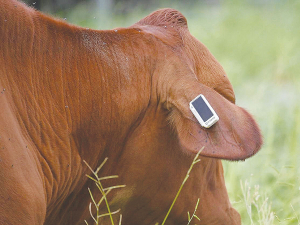 The Ceres smart tag is the world's first direct-to-satellite tag for agriculture.

This removes the need for any costly on-farm infrastructure - such as towers, transmitters or battery packs - to go 'live'.

It works instantly after being installed in the animal's ear using the specialised applicator. Positioning data from the animal is transferred via satellite to ground stations, through the Amazon Web Service cloud and back to the farmer.

The tags require a full constellation of low orbit satellites in order to work. The farmer is then able to use the information provided from the tag for on-farm solutions such as positioning, monitoring for biosecurity, health and welfare, while also overseeing the performance and traceability of the supply chain network - including theft detection.

In New Zealand, for example, as farmers recover from the Mycoplasma bovis outbreak and the apparent misgivings of a RFID-based traceability system, the Ceres Tag would offer instant traceability of any animals fitted with the device. This would provide safeguards to the wider agricultural sector during outbreaks or events of national significance - such as M. bovis or foot and mouth.

Designed to last for the life of the animal, the tags have a battery that can last for more than 10 years. The tags are currently fitted to more than 3,000 dairy, beef and more exotic bovines like bison around the world. There have been no reports of any tag losses, despite the very challenging terrain some of these animals roam on. Part of the package includes and accelerometter and temperature analytics, the former monitoring animal movement and relaying information on activity or inactivity, while the latter provides alerts to inform of oestrus, sickness or calving. Meanwhile, in the near future, the Australian agency Commonwealth Science and Industrial Research (CSIRO) e-Grazer add-on will also deliver on feed intake.

Animal welfare data will in due course offer farmers proof of production parameters. Additionally, the device can also be used to accurately position any stolen or missing livestock.

Independent research carried out by PWC, suggests a return on investment that outweighs the initial purchase out. Typically, farmers would tag around 50% of a herd to receive quantifiable data.