Farming systems will need to change 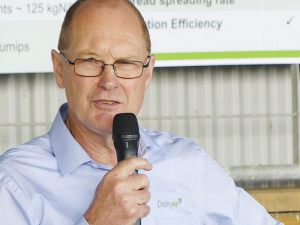 Farmers will have to look at their fundamental farming systems if they are to meet future nitrogen leaching limits, claims DairyNZ science manager Dave McCall.

However, he says farmers might not have to move completely away from “the philosophies we all grew up with”.

“But, we are going to have to dig deeper than just a few, small tweaks.”

McCall was speaking at the launch of a new DairyNZ initiative, called Meeting a Sustainable Future. This aims to help farmers in Canterbury’s Hinds and Selwyn catchments to remain profitable, while meeting new nitrogen loss limits under the Canterbury Land & Water Regional Plan (LWRP).

The project was launched at a well-attended field day on the Canlac Holdings farm at Dunsandel, in the Selwyn Catchment, run by sharemilker Tony Coltman.

McCall told the gathering that he was there to bring confidence that farmers can meet the new limits.

He says the first thing to know was that the more nitrogen that comes onto a farm, the more will be leached out. The question was how much nitrogen was converted into product.

“The poorest conversion is about 25% of the nitrogen that comes into the farm goes out the gate,” he explained. “In exceptional circumstances, you might get over 40-45% of that nitrogen going out the gate. So that’s what we’ve got to manage.”

He says fertiliser and feed are the two biggest nitrogen inputs.

“If everyone understands their nitrogen surplus, that’s a good start,” McCall explained.

The programme aimed to recruit about 30 farmers, take the science to them and “co-develop” practical solutions. McCall added that science had some of the knowledge, but farmers also had a lot of knowledge.

“We want to get you to understand what we understand, and then we want to work with you one-on-one to put what we know into the context of what you want to do on your farm.”

In return for that one-on-one help, those farmers would then pass their new knowledge on to others, McCall says.

“There’s more than one way of skinning the cat here and one size doesn’t fit all.

“So, we want to provide a bunch of examples that other farmers can come along to and listen to on days like this and decide ‘this is how I want to do it’.”

“Whether high or low, the solution is matching feed supply and demand in a way that doesn’t introduce too much nitrogen when you don’t want it.”

Showing how it's done

Canlac is one of the benchmark farms used by the Lincoln University Dairy Farm to judge its performance.

The property consistently ranks among the top 5% on operating profit – even while sharemilker Tony Coltman has managed to reduce N leaching significantly towards his 2022 target with a variety of measures including revised irrigation and reduced fertiliser use.

The farm has also taken part in the Forages for Reduced Nitrate Leaching project. Coltman has also introduced plantain in his pastures. Plantain’s lower nitrogen content means less nitrogen in urine, and it has a diuretic effect which further dilutes it.

The Meeting a Sustainable Future project is also supported by the Canterbury Dairy Leaders Group, whose chairman Alister Body said it would provide leadership for all farmers on this, a huge challenge.