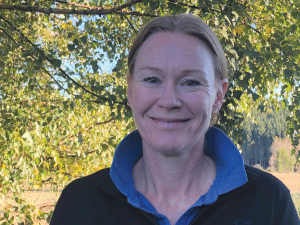 Experienced vet Ginny Dodunski has been appointed as the new manager for the Wormwise programme.

Experienced rural vet Ginny Dodunski has been appointed manager for the Wormwise programme.

The programme is a partnership between Beef+Lamb New Zealand (B+LNZ), the Ministry for Primary Industries (MPI), Agcarm, the New Zealand Veterinary Association (NZVA) and other stakeholders. It works to provide farmers with the latest knowledge and techniques to manage worms effectively and sustainably and minimise drench resistance issues. It also aims to lift productivity and the welfare of livestock.

Dan Brier, B+LNZ general manager farming excellence, says the
need for a programme manager was identified through the Wormwise strategy and action plan. This was undertaken
with stakeholder and farmer interviews, surveys and workshops during 2021.

“Ginny is very highly regarded, well known and liked in industry and by her farming clients,” he says.

“She has been involved in a number of parasite and farm systems research projects in the past as well as farmer extension through programmes like the Red Meat Profit Partnership (RMPP) Action Network and has a reputation for getting jobs done.”

The will include ensuring the programme’s activity across the industry is linked up across researchers, industry, government, vets, drench companies and farmers.

“Priorities for the next 12 months will include building on the action plan across our four key areas: education and engagement, incentivising farmer practice change, product stewardship and building data and testing,” Brier explains.

“A key part of the next six months will be getting across all the parties and people involved in parasite management in New Zealand to ensure everyone is working toward helping farmers become more sustainable and profitable.”

Dodunski joined Totally Vets (formerly Manawatu Vet Services) in 1998. Apart from a year working in Taranaki and another year in Australia, she has worked for them ever since – almost exclusively with farm livestock. She has worked from the Taumarunui clinic since 2014.

“When the need for a programme manager was identified, I thought ‘that is 100 per cent me’.

“Wormwise is so important because there is much to be gained from management that improves productivity but also reduces the impact of parasitism.”

Dodunski says many people have the impression that the programme is all about mitigating drench resistance, but she says it is so much more.

“It’s about improving productivity and sustainability and using all the tools in the toolbox, rather than just drenching.”

Dodunski sees raising the profile of Wormwise across the rural sector as an important focus.

“I would like to see it become a lot more visible, so that the principles become part of people’s day-to-day management thinking. It would be good to get to the point where farmers, who are trying to decide management of a certain group of sheep, will be thinking: ‘What would Wormwise advise – how does it fit’? It’s about keeping that lens over what you are doing on farm.

“Ultimately, everyone is going to need to have an integrated farm plan around what to do with things like water and greenhouse gases and part of that could easily include sustainable worm management. But it’s got to be practical, meaningful and fit the farm system.”

She believe that, at present, the good advice and awareness building is mainly coming through vets.

“The programme already has printed and downloadable material but I would also like to look at new and different ways to deliver the messages, including ramping up social media and working with other rural suppliers to make information about the programme more widely available.”

Brier adds that says farmers can expect to see a continuation of the current Wormwise extension programme through B+LNZ Farmer Councils.

“There will be a renewed communications and engagement plan and a real focus on helping farmers understand how other farmers are managing in the face of anthelmintic resistance on their farms.”

He says a key first step is defining, in partnership with others, how bad the parasite resistance problem in New Zealand actually is.

Dodunski will take up her new role at the beginning of May.