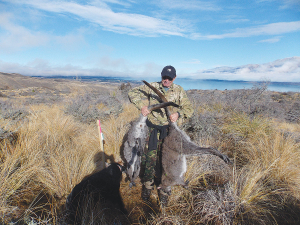 Poisoned wallabies from the Mackenzie Country.

Wallabies have been reported hundreds of kilometres outside the official containment zone, the council says.

Hundreds of thousands of Bennett’s wallabies are believed to live within the 900,000ha South Canterbury containment area bordered by the Waitaki River, Lake Tekapo and the Rangitata River.

ECan biosecurity team leader Brent Glentworth says the wallaby population in the region has steadily increased since the South Canterbury Wallaby Board was disbanded in 1992, when there was a move to user pays pest control.

An increasing number of wallabies are outside the containment area -- in Marlborough, Amberley and Dunedin -- and some got there with human help, Glentworth says.

“It is an irresponsible action that puts large areas of our landscape and habitat at risk,” he told Rural News. “It would be great to think people are more aware of the consequence of such actions and it is happening less often.”

The transportation of wallaby outside of ECan’s containment zone without licenced authorisation is an offence against the Biosecurity Act, with fines of up to $50,000.

Wallaby diet is similar to sheep and deer and the pest species prevents the regeneration of native bush and can deplete forest undergrowth. They can also foul sheep feed, destroy crops and plantation forestry and damage fences. This limits the livestock carrying capacity of farms.

Glentworth says ECan has a ‘user pays/user does’ approach to managing wallabies, including costs, within a wallaby pest management zone.

The council’s role is to kill wallabies to keep populations below a certain level. A major target area for extermination is on the southern side of the Waitaki River and parts of the Upper Waitaki Mackenzie catchment.

Killing methods include poison bait (either wallaby Feratox/cyanide or 1080 pellets, aerial or ground shooting, night shooting with spotlight or thermal scopes, and dog and rifle teams.

Glentworth says poison baiting is the most effective and efficient way of controlling big numbers. The job could be done by contractors or landowners with a controlled substance licence appropriate to the toxin being used.

Helicopter shooting after a snow fall can also be effective. But ground shooting has limitations, Glentworth says.

“In fact, shooting at high levels can spread populations or cause behaviour change (such as shyness due to over-shooting). Shooting can be an effective way of maintaining low numbers after large numbers have been reduced through other methods.”

ECan employs professional man and dog teams to cover likely wallaby habitat where numbers are low and to follow up on public reports and sightings. This has been done since 2008.

Over the last two years the council had trialled aerial thermal vision search and destroy operations with two companies.

“This method can cover a lot of country quickly and has killed some wallaby. But most importantly we don’t know how many we are not finding.”

To help with this, Landcare Research (with a Sustainable Farming Fund grant and supported by both Otago Regional Council and ECan) had been trialling ways to more precisely detect wallaby.