Could quads be on the way out? 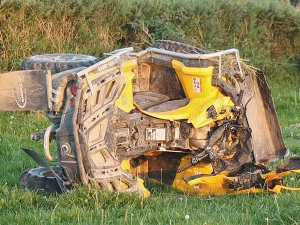 Continuing on-farm ATV accidents both in Australia and NZ could see legislative changes imposed that may see manufacturers withdraw from producing the machines.

A stoush is brewing in the quad arena in Australia.

Honda and Yamaha say they will stop selling quads if recent recommendations made by the Australian Competition and Consumer Authority (ACCA) are brought into law.

Such law would require that within 12 months all quads would need to comply with certain engineering standards, and within 24 months they would have to be fitted with operator protection devices (OPDs) aka crush protection devices.

Yamaha Motor Australia director Brad Ryanif claims, “the science behind these draft recommendations is both faulty and selective”. He says rider behaviour as easily the biggest contributing factor to quad safety.

Ryanif’s claims are backed up by the three latest coronial inquiries that concluded, “enforced behavioural standards, rather than product modifications, are the solution”.

Honda Australia has said much the same, calling on the Government to mandate the wearing of helmets and to make it illegal for under 16-year-olds to ride adult-size machines. Robert Toscano, managing director of Honda AU, believes the ACCA is essentially ‘experimenting’ with farmers’ lives, given that the automotive industry’s modelling and research has indicated there is no net benefit from the use of OPDs on quads.

“The results showed at best that fitting an OPD offered a 50:50 chance. For every injury or fatality it prevents it can cause another one.”

Toscano said no reputable company can meet a proposal that lacks engineering and design rigour.

“Any company that tries to meet the standard will be open to the conclusion that it is playing with farmers’ lives,” he said.

Interestingly, the chair of Australia’s Farmsafe committee, Charles Armstrong, described the comments of Honda AU and Yamaha AU as infantile. But he also said, “Last month, two Australian families lost a child to quad bike accidents”. Which raises the question, what was a child doing riding such a machine?

In New Zealand, where WorkSafe has said it will make a major announcement on quads later this month, the manufacturers, Motor Industry Association (MIA) and Federated Farmers remain opposed to the mandatory fitting of OPDs.

Manufacturers have declined to comment on a situation that is “not on the table for discussion in NZ at the moment”.

MIA chief executive David Crawford says the manufacturers his organisation represents are correct in not passing comment, given that there is no data to confirm that there would be a net safety gain. He said that of the devices on the market, he knew of none that had been independently tested to provide such data.

Crawford says the devices being marketed are bolt-on and they do not meet any design, engineering or fitment standards because none exist. Most such devices are made for fitting to a machine’s rear carry rack which is usually made from small-section box steel and has a load capacity of 40 - 60kg.

Crawford says that while OPDs are usually well within this limit, the dynamic forces during a quad roll – particularly at speed – exceed these ratings by many times.

“We believe there are better ways of governing safety, including the compulsory use of high-quality helmets, initial and ongoing training, far better maintenance, selecting the most appropriate machine for the job and keeping youngsters off full-size units.”

However, the general manager of the Agricultural Leaders Health and Safety Action Group, Tony Watson, commenting on the opposition to fitting OPDs, said, “If you want to go and talk to a family who have lost a loved one on such a device, that appears to have [few] or no redeeming safety features, they won’t really care too much about data.”

This brings emotions – rather than hard facts – right to the table. It also raises questions about the suitability of these machines for such tasks, given Watson’s comments which suggest he believes such machines are inherently unsafe.

This writer believes it borders on reckless to promote devices that are not manufactured to a recognised standard. So it would be wrong to move and legislate this position until such a standard is set, following extensive independent testing.