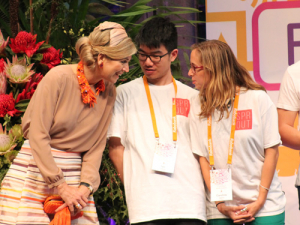 The Dutch queen with F2F winners.

Rabobank’s Farm 2 Fork (F2F) summit in Sydney was all about food – but briefly became about fashion as Dutch Queen Maxima took to the stage with husband King Willem-Alexander to congratulate winners in the Food Bytes! competition.

King Willem Alexander also officially opened the conference, speaking about how a small country like the Netherlands had been able to become the world’s second largest exporter of food through technology and considered use of land.

Rabobank executive board member Berry Marttin spoke earlier on how in China today two thirds of all sales are done through web markets. Today the Dutch buy their food through traditional retailers but the internet is quickly changing that.

He says there will be fewer farmers and bigger farms and consolidation in the food companies.

Farmers will need to make sure they product what consumers want to eat. The current model is to produce and sell later. He says if you produce what the consumers want they will pay more – but who will get that money? Farmers need to ensure it comes to them.

The Food Bytes! Competition was for food companies with new innovations competing for investment funding.

Rabobank has lifted its forecast milk price for this season by 45c to $7.60/kgMS.