A treasured legacy at Te Mata 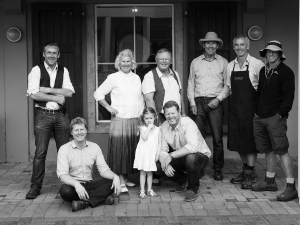 The Te Mata team recreate a photo from 1913.

Toby Buck's upbringing was a vintner-version of the classic, hardworking Kiwi farming family - skateboarding on the winery crush pad, working in the cellar after school, picking grapes and planting vines.

But it wasn't until he overheard someone say a treasured early Te Mata Coleraine transported them back to a Hawke's Bay summer, that it dawned on him the wines his family made each year were something so meaningful.

Raised on Coleraine Estate - first planted with vines in 1892 and purchased by the Buck and Morris families in 1974 - Toby says the next generations have dived in to continue the estate's legacy. "There's no stopping the family involvement - we're as enthusiastic now as we ever were."

Wine was discussed at every family dinner with parents John and Wendy, and their normal winemaking calendars punctuated - when Toby was a young teen - with travel through Europe, so exotic nobody at school believed him. "We were in Burgundy when someone from a cooperage rolls up a five-tier chees trolley in a restaurant. And I'm a kid from Hawke's Bay. It was an odd experience to have; a heady experience."

But there was never any pressure to join the business, where employment decisions are board-approved. "We're all stubborn people and if you really push us we'd go the other way," he says. "We all contribute. We're part of that larger family environment; there are three other families involved, with other parents and offspring working at the winery as well."

Family continuity is priceless for a true estate production known for reds that "behave in a particular way, that will develop over time", an "anomaly" in a country famous for its whites. That "European style, or independent style of winemaking, on a medium to boutique site, every step done on site", was something John was careful to maintain, Toby says.

He refers to McKinsey Report findings that over 80% of the world's wealth is generated by family businesses, with higher levels of investment in research and development, and better shareholder return. Te Mata is a great example, with decades of phased development due to an "insane interest in innovation", he says. "Te Mata's technical development is very high precision... We're looking at 40 to 50 years' work of many people finally coming to complete fruition now."

And that's set to continue. In 2013, Toby's position as youngest Buck in the winery was swiftly taken by niece Zara, followed by her brother Henry and cousin Thomas. "You don't get long in the sun," he laughs. "Our parents have given us a huge amount in our lives with Te Mata estate but it's the future of Te Mata that's so exciting. All three brothers involved in our generation. The next coming through. The continuity." What's been laid down is incredible, he adds. "The reality is, if we were to leave, we'd want to do exactly the same thing just down the road."