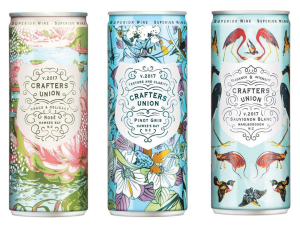 Selling wine in a can is nothing especially new, it just hasn’t been embraced by wine producers, but is it time to look at canning wine as well as selling it in bottles?

One producer who is looking very seriously at this option is Winelord Limited but you won’t see their Middle-earth wine in a can.

They are looking at the option of putting wine in a can under a different label, a label designed to appeal to particular sectors of the wine consumer market.

Their ciders will be available on tap and packaged in cans using a high-tech canning line they are importing from overseas. This of course leads to the conversation about what else can they use the canning line for, with obvious choices being local craft beers made by others and possibly wine.

There are plenty of benefits to putting wine in a can, like being fully recyclable, making them eco-friendly, they are highly portable making them perfect for taking on that tramp, great for taking on boats, selling at festivals and many other outdoor activities.

Ryan says; “Wines in a can won’t replace wine in a bottle but they have their place in the market. In the USA we are seeing more wines available in cans and people in the millennial age group are more receptive. In many ways it is like when screwcaps were introduced to wine, people were wary of them but now screwcaps dominate the market, wines in cans will slowly grow in popularity.

“You buy a bottle of wine and pour it into a glass, you buy a can of wine and you can pour it into a glass, or if you want, drink it out of the can at the beach. That is a real option and I like the fact you can get a half bottle or smaller serve so if you are a couple you can have your own choice - I want a red, you want a white. A can means you can have a fresh wine of your choice every time.”

When it comes to the product in the can, be it wine or something else there is no light-strike and less oxidation because it has a true seal, cans are easier to recycle, they have a very small foot print because they crush down and are very light to transport compared to bottles.

But what about the effect on the wine? Trudy said she has tried a number of wines from cans and the research she has done suggests the product gets to market as the winemaker intended.

“Cans are used for a wide range of things, from fruit and vegetables to meat and pasta ready-made-meals, to soft drinks, beer and cider. So why not wine?

“I also don’t see any significant wine production or quality risks. We will be making the wine in exactly the same way, just putting it in a different container.”

According to Ryan if they produce wine in a can they will do it under a brand that is a bit more relaxed and make it fun, aiming at the younger market.

“It is about casual lifestyle rather than casualness around the quality of the wine. The wine quality will always be paramount. I can see wines in a can being an introduction to quality wines rather than RTD’s. It could be the start of their journey into experiencing quality wine from New Zealand, and Nelson for that matter.

“We have a state-of-the art canning line coming to us and we need to make the most of the asset, so looking at wine in a can is an obvious next step.”

Cans the way of the future?

A quantitative survey undertaken in America is showing that wine-in-a-can is something the industry cannot ignore. If they do so, they may be losing out on a large portion of the future market.

The findings of a survey of nearly 1000 people was undertaken by Susquehanna University and Texas Tech University. Given the wine-in-a-can market is experiencing growth rates of more than 50 percent in the States, the survey was timely. And while many may think it is a fad that appeals only to one small segment of the market, the results show that is not the case.

“Gen Z, millennials, Gen X and baby boomers are all buying wine in a can at the same level,” the survey report states, “although Gen Z and millennials have a higher awareness and trial activity.”

Demand for this form of packaging has existed for over 80 years, ever since the first wine-in-a-can was produced in 1936. Yet due to lining issues it failed to catch on until Barokes

(Australia) solved the can coating issue in 1996 with its patented Vinsafe technology.

The trend of producing wine in cans is strengthening, with dramatic double digit year-on-year growth in the States alone.

Early adopter producers of wine in a can see it as an extension of their wine into new markets as opposed to a mere substitution or cannibalisation of traditional bottled wine.