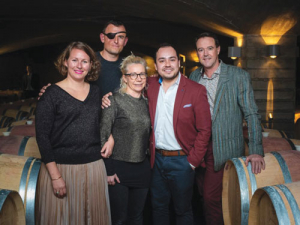 Those numbers relate to the inaugural Family of Twelve wine tutorial held earlier this year. The participants were all individuals working with New Zealand wine in either New Zealand or Australia, selected by a panel of Family members.

Over three days they took part in tastings of not only Family of Twelve wines, but a vast array of other wines from the world’s greatest estates. Tutorial Wine Chair, Blair Walter of Felton Road said it gave the participants the opportunity to taste the Family wines in a global context, which included many of the world’s most revered and prestigious wines

At the end of the three days, Andres Aragon Perez from the Merivale Group in Sydney was named Tutorial Dux. His prize, a return trip to New Zealand to tour all Family wineries and a collection of the Family’s hero wines for his cellar.

In addition to the Dux, Maciej Zimny from Noble Rot Wine Bar in Wellington was named the winner of the Institute of Masters of Wine prize. He will travel to Adelaide, sponsored by the Institute to attend the annual education seminar this coming November. He will also get to experience the Barossa Valley first hand, hosted by Australia’s First Family of Wine.

Family Chair, Paul Donaldson described the participants as future leaders of the wine world, and the tutorial provided them with a “deep and memorable dimension.”