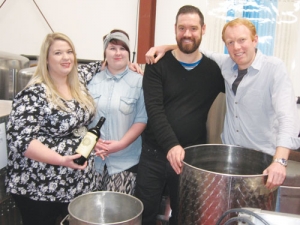 From left the Golden students; Eleisha, Maddie, Stephen and Tom.

An EIT foursome have achieved a first as the only students to win gold in New Zealand's Bragato Wine Awards.

Their medal-winning wine, a 2014 Syrah, was made from grapes donated by C J Pask and grown by company viticulturist Danny van Selm. One of 43 Syrahs entered in the awards, it was judged alongside commercial entries and was one of five golds in its class.

"Given all the heavy rain, we had to be pretty selective as the fruit had taken a bit of a battering," Stephen recalls. "We had to get it off skins pretty quickly, but we knew the flavours were there."

The students picked enough from the Gimblett Gravels vineyard to fill a four-year-old French oak barrel. Wine science and viticulture lecturer Tim Creagh opened up the winery on campus – "he spent most of his day off with us," says Eleisha.

Six months in and feeling the maturing wine was coming along nicely but in need of a little extra oak, the group added barrel staves.

Tom says there was an ongoing interchange involving the four classmates. The process was so cordial, it inspired the wine's name, Harmony.

"We did it by the book, with blending and fining trials," says Stephen, "setting up bench trials for everything."

Mike Compton says this year was a first for a non-commercial wine to have won gold during his time as awards director, since 1998.