The science of wine 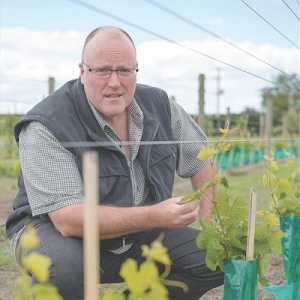 Vaughn Bell from Plant and Food.

The battle against Leafroll virus and mealy bug vectors has been lucky in having one Hawke’s Bay scientist on its side. Mary Shanahan talks to that man – Vaughn Bell from Plant and Food.

Gimblett Gravels has a great story to tell about its battle against leafroll virus, says Vaughn Bell, the scientist who could fairly be described as a military strategist in a campaign that is successfully targeting the virus and its mealybug vectors.

Five years into a six-year study, the Plant & Food Research scientist is upbeat about progress being made in reducing the incidence of leafroll virus in his study blocks in the Gimblett Gravels winegrowing subregion.

The study is showing the virus can be managed by removing (rogueing) infected vines and their roots which might otherwise provide a virus reservoir for mealybugs to acquire and spread the virus to neighbouring vines.

“My sense,” Bell says of the Gimblett Gravels Winegrowers Association, “is they’ve actually got a really positive story that needs to be told.”

Without identifying vineyards involved in the study, the message is getting out there.  Results are being converted into recommendations relayed on to the industry through New Zealand Winegrowers’ various communication channels.

Bell is taken with the people he’s met in the wine industry.

“I’m very impressed by the trust they’ve shown in me and others and the fact that they’ve given us access to their vineyards to undertake this research over so many years.”

New Zealand, he says, picked up on the trail-blazing work of Professor Gerhard Pietersen who began working with Andre van Rensburg, winemaker at South Africa’s Vergelegen Estate, in 2000 in rogueing infected vines in young blocks with a low incidence of the disease (less than 2.5 percent) and in newly replanted blocks where 100 percent of the old vines had been removed because of widespread virus infections.

Bell says much of this work remains confined to Vergelegen Estate – “to my knowledge, there’s nothing in the world that compares with the breadth and scale of the Gimblett Gravels virus project.”

Working as a scientist has been a career swerve for Bell, who entered the banking industry as a school-leaver at the end of 1991.  After 17 years, with the bank about to embark on its fourth restructure in eight years, he opted to take redundancy and retrain.

Studying for his Bachelor of Science, he stumbled upon entomology.

“Majoring in botany, it wasn’t until I got to the third year doing a paper on applied insect ecology that the lecturer started talking about biological control, a natural process of regulating pest insects that I’d never heard of.”

Bell progressed to a Master of Science and, after graduating, joined HortResearch, now Plant and Food Research.  Eight months later, at the start of 2005, he began working with a number of Gimblett Gravels wineries on a study using a synthetic sex pheromone to track the obscure mealy buy – an opportunity to learn about one of the vectors of leafroll virus

Before 2005, when a New Zealand Winegrowers’ survey showed a dearth of industry knowledge on the leafroll virus, work on mealy bugs in vineyards had been sporadic.

“There was a little bit of work coming out of South Africa through plant virologist Professor Gerhard Pietersen, but most of his work was on leafroll virus management and at the time it was either unpublished or limited to local technical journals.”

Pietersen and the late Dr Rod Bonfiglioli, a member of the NZWG research committee, discussed the virus at a conference in South Africa in 2006.  As a result, Bonfiglioli became concerned that remnant roots could be reservoirs for the virus in New Zealand vineyards.  If mealybugs were feeding on these roots and then dispersing to newly planted grapevines, he believed there was potential for the virus to be transmitted to healthy vines.

At Bonfiglioli’s urging, Bell began research into remnant vine roots in 2007.  Asked if he would consider an applied study on the management of the virus for his PhD, he accepted, seeing it as a project that suited him well.

“I’m not interested in the scientific modelling type scenarios or in doing research for the sake of research.  I get far more enjoyment out of doing something that will hopefully identify practical cost-effective solutions to a real problem.”

Starting in November 2009, Bell focused on vineyard blocks where, at the start of the co-funded NZWG, Sustainable Farming Fund and Gimblett Gravels Winegrowers Association project, virus incidence ranged from four to 24 percent.

The study followed the patterns of virus spread of mealy bug and mealybug populations in blocks planted in red varieties such as Syrah, Merlot, Malbec, Cabernet Sauvignon and Pinot Noir.

By 2014, results showed that 90 percent of new infections were occurring among vines in close proximity to an infected vine rogued one or more years previously, so it seemed the mealybugs weren’t travelling far.  This identified the need to rogue infected vines and remove as much of the remnant root material as possible.

“It’s a big ask for growers to remove vine roots, particularly for old vines with a deep root system.  In reality though, we believe most of the roots that should be targeted for removal are in the first 200-300mm of the soil surface because that’s where we typically find subterranean populations of citrophilus mealy bug.”

At the end of 2014, the virus incidence in six blocks was less than one percent and “one percent was the target threshold we were aiming for at the start of this project.”

Bell has also spent a lot of time monitoring mealybug populations in the study blocks’ vine canopies.   While problems still exist with vector management on some blocks, he believes that the success of the virus elimination project has probably averted a leafroll virus epidemic in many vineyard blocks.

“They’ve done a tremendous job,” he says of growers, vineyard managers and staff taking part in the research.  “I actually would go so far as to say they’ve very nearly beaten the leafroll virus in blocks planted in red variety cultivars.  In the Gimblett Gravels, it’s been an area-wide initiative and quite apart from their wines that result sets them apart on the world stage.”

Bell recently returned from South Africa, where he was invited by Pietersen to present New Zealand results and experiences of leafroll virus to industry stakeholders.

“There’s a perception in South Africa that this virus management work is the preserve of large multinationals with lots of cash behind them, and some view this as a major barrier to the widespread adoption of virus management initiatives.

“In New Zealand, however, the sector has shown that while there are some large companies that are acting, there are as many if not more small family-based operations doing this and achieving good virus control.”

When the virus elimination project winds up, Bell will join a new research team undertaking a seven-year Vineyard Profitability and Longevity project, jointly funded by NZWG and Government.  He will focus on ground cover under-vine management and the possibility that this habitat, if left undisturbed, might be an important sink for mealy bug populations, attracting them and retaining them in an off-grapevine environment so they neither acquire nor transmit leafroll virus.

“I think the biology, the science behind it, is great,” Bell says of his research work.  “I love that aspect of it, but I particularly enjoy interacting with the growers, the people on the ground.  I’ve really warmed to them and to the issues they face.”

Bell appreciates the work being done by Ruby Andrew, who provides communications services to NZWG’s research arm, and the virus management team.

Aquaculture – an opportunity to diversify

Aquaculture is the fastest-growing animal production sector, experiencing global annual growth rates of 6% over the past 15 years.