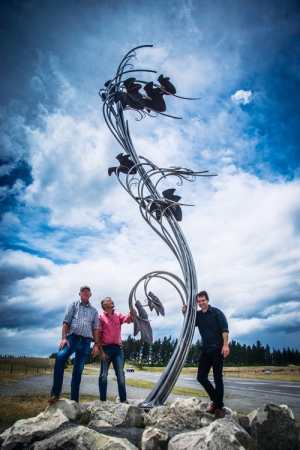 The Waipara landscape is special in its own way. Large areas of flat valley land, rolling hills to the east, dozens of generational sheep farms, larges tracts of vines and now a massive sculpture that will help define the area.

It has been six years since the idea of creating a regional landmark was first mooted by Julian Ball and Daryl Harris of the Waipara Promotions Association. It's a long time between the original idea and the unveiling, which finally took place in November last year.

For Ball, seeing the final product was a very sweet moment.

"It is magnificent and we are thrilled with it. It was back in the winter of 2009 that Daryl and I discussed creating an icon for the valley. It seemed to us that too many people were just driving along the main highway, through Waipara without stopping. So we wanted something to give the area an identity."

The sculpture certainly does that, and it is an appropriate nod to the growing reputation of the region as a wine producer of some repute.

Ball says initially they didn't have any concrete ideas of just what the landmark should represent. They left that to local sculptor Raymond Herber.

"We gave him a fairly broad brief. We wanted it to be prominent and represent something in the area. He chose the grapevine and we were happy with his one and only design, so we took it from there.

Raymond initially wanted some Riesling grape leaves to base his sculpture on, which were duly delivered. Those initial forgings were used by Harris and Ball to raise awareness of the project locally and to help raise funds. However Ball says they were a little "naieve" about just what would have to be undertaken to allow such a large sculpture to adorn the main highway.

"We didn't realise there was going to be such a significant amount of engineering and the cost that would involve before the project could be completed," he says. "But we are very happy that it's over designed and built. And believe me, it has had a good test in the last couple of weeks."

He says the windswept theme is extremely appropriate, given how strong the gusts buffeting the Waipara Valley can be. Even on the day of the unveiling, it was more a zephyr than a breeze and everyone was thrilled to see the vine gently swaying despite the gale conditions.

As for achieving what they set out to, Ball says it has been an amazing addition to the landscape.

"The reaction to it has been tremendous. Just about every time I go past it, there is someone taking photographs. And I think it has got people starting to think about the wider area, which is a good thing. Plus it's a focal point for the area. Mainpower have offered to provide lighting so it can be seen at night and it doesn't matter whether you are in a car driving along the highway or in the train passing through, you still get to see it. It really is pretty amazing."

The sculpture has been placed on the corner of SH1 and SH7, at the turnoff to Hanmer Springs.

There's no need for me to say keep an eye out for it if you are travelling that way – because it's pretty hard to miss.