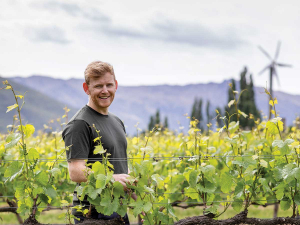 Ben Tombs grew up surrounded by Marlborough vines, but says his career in wine began “purely by luck”.

After finishing high school and planning a ‘gap’ year before university, Ben saw an ad in the local paper for a vintage cellar hand role at Wither Hills. The seduction of wine was swift, and vague plans for a commerce degree were soon overtaken by the excitement of vintage, where everything seemed “so foreign and so interesting”, he says. “You learned something new every day.”

Ten years later, Ben is Assistant Winemaker at Peregrine Wines, the 2020 Tonnellerie de Mercurey New Zealand Young Winemaker of the Year, and the first Central Otago winemaker to win the competition. And he’s still excited by the “journey”, with an industry so innovative that there’s always something to “stumble upon and learn”.

Back in his first Marlborough vintage, Ben connected with the blend of science and creativity in winemaking, and revelled in meeting people from all around the world. After two years with Wither Hills he went to Hawke’s Bay to do a Bachelor of Viticulture and Wine Science at The Eastern Institute of Technology and, while completing his degree, received the Bragato Exchange scholarship, taking him to Italy for six weeks immersed in the wine industry. It was his first time abroad and “an amazing opportunity”, says Ben. “After that I decided I wanted to see more of the world.”

So that’s just what he did, stacking up 12 vintages in New Zealand, France, Australia and the US, before settling in Gibbston in 2017. He’s smitten with the beautiful valley, “surrounded by crazy mountain ranges” and an abundance of “accessible adventure”. Central Otago’s long summer days enable lingering hikes in the hills, he says. “The sun doesn’t go down until 10 o’clock, so there’s ample time to enjoy a wine by the lake and then tramp out.”

But the “biggest drawcard – what keeps me here - is how collaborative the industry is”, he adds. “It’s a really cool community – everyone is really passionate about their job and their place and really willing to share their knowledge.” He loves the small size and the quality focus of the area’s
wine industry, saying conversations are about how to make the wine better, rather than how to make more. “There’s a multitude of wineries down here that are real stewards of the land… It’s great to be a part of that.”

Ben has won the regional final of the Young Winemaker competition three years running, but was unable to go to the nationals last year, as he was on the Burgundy Exchange. “It’s been such a long journey,” and “super challenging”, says Ben. “It really pushes you to get the most out of yourself, pulls you out of your comfort zone and highlights your weaknesses.”

Ben and the other national finalists - Ben McNab from Matahiwi in Wairarapa and Peter Russell from Matua in Marlborough – had a packed day at the competition, including a laboratory module, writing an essay on creating a small parcel of Chardonnay for vintage 2022, and a CAPEX paper on the pros and cons of replacing a humidifier in a barrel hall, as well as an interview, wine judging, and a speech at the awards dinner about why their winegrowing region is the best to visit this summer.

Ben, who is halfway through Lincoln University’s Master of Business - Global Management and Marketing - says the challenges don’t stop with the win, and Peregrine’s Winemaker Nadine Cross and Chief Executive Fraser McLachlan are always pushing him to grow. “They are a big part of my journey.