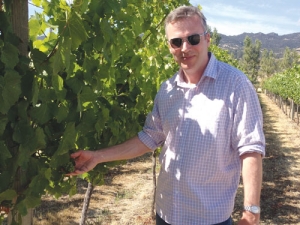 Folding Hill vigneron Tim Kerruish plans to plant half a hectare of white grapes on his heat drenched, Pinot-dedicated slopes at Bendigo in Central Otago.

The site sits beneath a (perplexing) new cattle station, which is heavily irrigated and stands in stark green contrast to Kerruish’s arid Folding Hill Vineyard, from which he produces 1500 cases of Pinot Noir each year.

This year Chardonnay will join the Pinot grapes, which are grown on land that was formerly known as Clearview Station and devoted to its former life as a sheep farm.

Tim and Nikki Kerruish bought 16 hectares of the sheep station in 2000, planting four hectares of Pinot Noir in 2003 and producing their first vintage in 2007. The Folding Hill Pinot Noirs are unfined and unfiltered; made by Fred Reinds at the old Black Ridge Winery in Alexandra.

The couple arrived in New Zealand 20 years ago. Each was on their own individual quest to fish, ski and walk. They met each other early on and shared both a passion for the land and for their individual careers in medicine. He is a doctor and works as a consultant in the emergency department of Dunedin Hospital; she is a bio-ethicist.

Inspired by his own early student winemaking days, Kerruish originally began producing ‘wine’ back when he bought cans of grape concentrate from Boot’s in the United Kingdom.

The couple now live in Dunedin and have built an off-the-grid home in the middle of their Bendigo vineyard in Central Otago. It is on land that he describes as “a drop dead gorgeous site that we visited on a perfect winter day when fresh snow had just landed on the hills opposite, so we bought it straight away.”