Top performer keeps at it 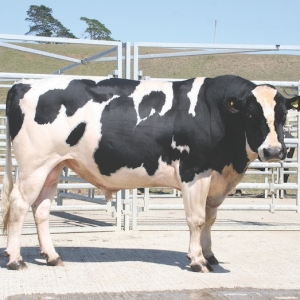 The bull has broken the 300 mark on the breeding worth (BW) and New Zealand merit (NZMI) indices, a first for any CRV Ambreed bull.

Managing director Angus Haslett says the indices are nationally recognised – BW as an economic index and NZMI as a desired gains index. They are useful guides in developing a breeding programme, he says.

“NZMI was created by CRV Ambreed to help us breed what we believe to be more desirable traits for economic benefit, creating a long-lasting and productive herd for our customers.

“Only the top five bulls of any breed in the country are at or above the 300 mark – so this milestone means Maelstrom is part of an elite level of genetics. Maelstrom entered the market in 2013, and throughout 2014 he has been top of the CRV Ambreed list for both NZMI and BW indexes.

“We have sold every dose of semen this bull has produced… over 130,000 doses in his two years of being marketed,” in New Zealand, the US, South Africa, Australia, Ecuador and South America.

Haslett says in New Zealand alone Firenze is recorded as having 47,805 daughters in 3683 herds.

“Of his sons, 67 have been enrolled on the animal evaluation database for herd improvement in New Zealand.”

Maelstrom’s breeder, Alistair Megaw, West Otago, says his strengths are protein, fertility, longevity and udders. “He ticks many boxes that dairy farmers in NZ can utilise to improve their herds.

“We have a number of Maelstrom’s daughters in the herd. They have great production, temperament, fertility and no mastitis. They’re also of good stature.”