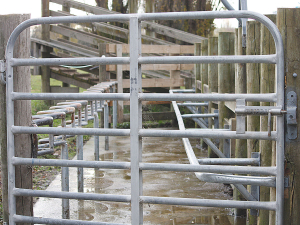 AB technicians are safer onfarm after a national safety campaign to improve their work environments.

LIC national AB manager Dave Hale says AB technicians have a very important job onfarm but their success can be compromised by the state of facilities provided.

“The variation between facilities on each farm was vast, with most technicians required to do their job in the confines of milking sheds.

“Balancing precariously on unstable platforms while inseminating cows wasn’t out of the ordinary and it wasn’t good enough.”

To ensure LIC’s 840 AB technicians are working in a safe environment, the co-op developed a national standard for AB facilities and trained 30 technicians to make checks NZ-wide.

To date, reportable health and safety incidents for LIC AB technicians in the 2018 season have dropped by 47%.

“Although it was common practice for facilities to be checked before the start of the AB season, the approach wasn’t consistent.

“Setting up a national standard for AB facilities and implementing this nationwide is a first for NZ. It has meant all farms are treated fairly as they’re checked and graded based on the same criteria,” Hale says.

The new standard requires that all animals are held safely and securely and technician’s footing is firm, safe and on the same level as the animal.

“[We’ve set up] a bronze minimum standard and silver and gold grades. This is a long-term initiative so we wanted to give farmers a gold standard to aspire to.”

Some farmers have challenged the standard, Hale says. But once they understood the purpose of the checks most have been understanding and some even welcoming.

“This isn’t a tick box exercise. There’s a bigger picture. We simply want our staff to have the best opportunity to get our farmer’s cows in-calf and return home safely every day.”

The checks are now standard practice for the co-op and are continuing NZ-wide.

“To date 6500 of our 8600 AB facilities have been checked. We’re finishing off the first round of checks with the aim of having, by late June, inspected and graded every AB facility where LIC’s AB technician service will be supplied in spring 2019.”

Hale thanks farmers for their support. “Without the help and co-operation of our farmer shareholders, this campaign would not have achieved such an outstanding initial result.

Each year Paul and Rosie Franklin synchronise 600 heifers and mate them off-farm near Waipukurau.

“All we had at the grazier’s property was conventional cattle yards,” Paul says.

“It was just a long race. You could put the first heifer securely in a front bail, but to inseminate all the others somebody was having to climb over the rails to get access to the race and all the other heifers in there.”

“We’ve known the facilities have needed upgrading for a long time.”

The visit by a member of LIC’s AB facilities team prior to last season’s mating seemed to provide timely impetus for the upgrade.

“The owner provided a bit of timber for the job and we got a second-hand herringbone rail from a nearby farmer. We made a gate coming off the side of the race, so we poured concrete, set some pipe in the ground and welded the herringbone to it.”

Their approach was endorsed by LIC’s AB facilities team.