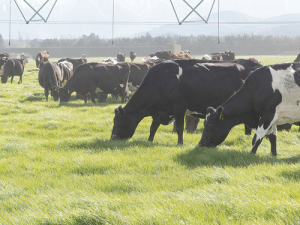 Some dairy farmers are supporting Greenpeace's campaign against further intensification of dairying.

“Several dairy farmers have contacted us on social media and identified themselves as dairy farmers, and totally agree with our campaign,” said Toop. “We haven’t really had that before, in our work.”

Greenpeace in early May used aerial drone footage of the irrigation pipeline being built for the Simons Pass dairy conversion to launch a petition calling on the government to prohibit all new dairy conversions and further intensification of existing livestock farms.

Toop said the petition was one of their fastest-growing, recently passing 26,000 signatures.

“We are highlighting what’s happening there because obviously the Mackenzie is not cow country. It’s dry, its soils are leaky and its very ecologically sensitive.”

Although neither Greenpeace nor the EDS had been party to the Environment Court appeal giving the Simons Pass development the go-ahead, Greenpeace believes the fight isn’t over.

“Better late than never,” said Toop. “It’s every New Zealander’s right to stand up and try to stop intensive dairying from ruining the Mackenzie and polluting our rivers and lakes.”

Valentine’s claim that he would put only about 5000 dairy cows on the farm “has no standing” as long as the consent for effluent from 15,000 had not been terminated, she said. Nor did he yet have consents for all the planned dairy sheds.

Greenpeace would also oppose freeholding under tenure review, in the belief that without freehold the project would be financially unviable.