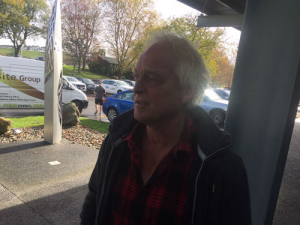 Cambridge dairy farmer Henk Smit has confirmed that a herd of 330 cows, he partly owns, is infected with Mycoplasma bovis.

The farm in Rotoorangi is under regulatory restrictions from the Ministry of Primary Industries (MPI). It is the first known infected farm in the Waikato.

Two other farms, with herds co-owned by Smit, are under restrictions.

Smit confirmed that his farm was infected at a meeting of Waikato farmers at Lake Karapiro today. About 800 farmers attended the meeting.

Smit says he found out about M. bovis infection two weeks ago.

He doesn’t know what MPI plans to do with the infected herd.

“I see MPI as a big black box… you cannot get nothing out of them,” he told Rural News.

“They’ve got a couple of people driving around this big black box giving some sort of information but it’s all very vague.”

Smit says there has been a “restricted property” sign on the front gate of the farm.