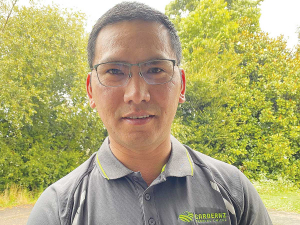 Carlos Delos Santo is excited at the chance of sitting through DairyNZ board meetings and contributing to important sector discussions.

Carlos Delos Santo works for the Onuku Maori Lands Trust which runs a number of dairy farms near Rotorua as well as a sheep milking operation and other businesses. The other new associate director is Cameron Henderson who farms in Canterbury with his partner Sarah.

Delos Santo says he’s really excited to be selected for this role, as it allows him the chance to gain knowledge on what occurs at DairyNZ board meetings and contribute to important sector discussions.

“I want to see what’s happening in DairyNZ and the discussions they are having around the board table. I want to learn from the directors  and increase my governance knowledge and understand more about the industry that I am very passionate about,” he says.

Delos Santo says during his previous roles he’s tried to use his unique background to bring new perspectives to discussions and hopes to the same in this new role. His term as an associate director begins in December after which he will attend six board meetings.

He came to New Zealand 20 years ago from the Philippines and has always been in the dairy industry. It’s his passion and over the years he and his wife Bernice have worked their way up through the ranks of the industry. He started off as a farm assistant on a farm at Mangakino and has held various sharemilking roles around the Waikato and Rotorua areas.

Along the way he has won several awards in the dairy industry. In 2007 he was named as the share-farmer of the year for the central plateau and was eventually runner up in the national competition.

In 2019 he and wife Bernice moved to take up their present position as 50/50 sharemilkers on one of the dairy farms owned by the Onuku Maori Lands Trust. This is the Trusts largest farm and is based at Rerewhakaaitu (meaning “wandering spirits”.) In 2018, Onuku won the prestigious Ahuwhenua Trophy for the top Maori dairy farm.

The DairyNZ associate director scheme was established in 2013 and is designed to assist up and coming young dairy farmers to gain skills that will help them achieve leadership roles in the sector. The associate directors can participate in board discussions but do not have voting rights.

DairyNZ chair Jim van der Poel says the associate director roles have been providing the DairyNZ board with valuable input and contributions since the roles were established. He says every year the associate directors bring their unique knowledge and opinions which help shape board discussions and decision-making.

“It is exciting to have Cameron and Carlos joining us this year, as they both bring their individual strengths and experiences which the board will value having around the table. Their experiences will bring new thinking as the sector progresses,” he says.