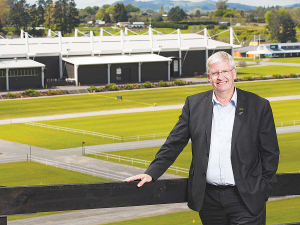 Fieldays chief executive Peter Nation says it's great to have Fieldays back for 2021.

It's likely that the mood would have been buoyant given this year's dairy payout and a strong prediction for the new season just underway.

Whether that turns into business being written might be a different matter, given that many machinery distributors are reporting a market that is already ahead of last season by up to 20%, leading to issues of limited supply before the end of the year.

In many cases, these supply issues were predicted earlier in the year, with strong marketing campaigns bringing orders forward.

Fieldays chief executive Peter Nation emphasised the importance of the event in terms of rural folk reconnecting after been through the isolation created by Covid. He also noted that the event had seen a large number of new exhibitors taking part and pushing overall numbers to beyond 1000.

Visitors saw a new site layout, with a few open spaces brought about by around 4% of previous exhibitors pulling out. However newbies like McDonalds and ANZCO were at Mystery Creek for the first time.

"It's hard not to be impressed by some of the large investments being made by our exhibitors," Nation added. "Some increasing the size of their sites and also making use of substantial audiovisual displays."