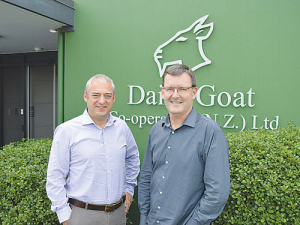 A new leader is at the helm of Hamilton’s Dairy Goat Cooperative but don’t expect big changes.

David Hemara, who took over this month from Tony Giles as chief executive, says his determination to maintain a stable course outweighs any desire for change.

“The culture we have in the business -- the spirit of cooperation that exists between staff and shareholders -- is an important part of the DGC fabric.

“We have control of manufacturing and product development, ownership of brands and manufacturing entities and shareholder alignment.

“I’m determined that as we grow, those are the things that need to be maintained,” he told Dairy News.

Hemara, who joined DGC in 2014 as general manager strategy and commercial, says he is taking on a company with “very strong fundamentals”.

He says DGC’s business has grown enormously under the leadership of Giles, who joined 18 years ago and led its marketing unit before becoming chief executive in 2014.

Giles says DGC has been a wonderful place to work and grow.

“When we started out, we would have never imagined getting to where we are now. Sometimes you pinch yourself, really.

“Having said that, the company has always had a long term view of things -- investing now for reward later, and that’s still the case.”

Giles says a lot of market development and science work underway will pay dividends in the future. “That’s one of our real strengths.”

Giles has been responsible for building DGC’s market from scratch. He recalls a steady growth during the first 10 years, off a small base; in the past six years growth doubled, leading to the construction of a second powder dryer, the single-biggest investment in the company’s history.

“It’s interesting that when I started with DGC we had more shareholders but more smaller farms; we went through a period of consolidation in which the number of farms went down and herd sizes went up.”

Today, the co-op has 72 farms, with average herd size of 700 milking goats. DGC processes 50 million litres of milk annually. Last year turnover was $193m and is expected to reach $230m this year. The co-op still has a waiting list of suppliers.

;Giles has also been instrumental in taking DGC’s own brand Capricare into the EU, a potential growth region for the co-op.

Several years ago DGC led the process to compile a dossier to convince the European Food Safety Authority that infant formula from goat protein is safe for children.

Hemara says until then the EU’s rules on infant formula applied mostly to cow and soy milk.

“Getting regulatory approval to get our product into Europe was huge work and led by DGC; this has allowed us to get into an new exciting phase of development and growth.”

DGC’s main competition comes from manufacturers in France and the Netherlands.

Hemara says the hard work done by DGC to develop new markets has attracted compettion which is “quite normal”.

“Our aim is to keep striving to be better and stay ahead of competition. A quality product and very strong brand and market development is what we strive for.”

Swiss beauties live up to their name

There is a definite Swiss connection on Rene and Verena Burri’s dairy goat farm at Te Aroha, Waikato.

Hauraki dairy farmers Michael and Megan Webster looked at diversifying their business three years ago in a bid to spread the risk.