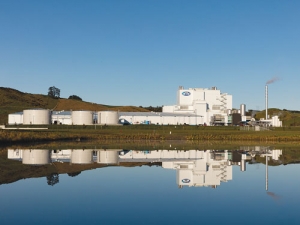 One of New Zealand’s largest greenfield dairy projects is set to officially open in early November.

The $220 million infant formula manufacturing and packing plant at Pokeno, north Waikato, is the first plant outside China for Yashili, a big Chinese infant formula trader.

Yashili is keen to put the state-of-the-art plant on the world map; it plans to open the plant to busloads of tourists, to tell them about the business then show them around.

The plant has started making 25kg bags of base powder and cans of formula; production will rise in the coming weeks, reaching for the plant’s rated 55,000 tonne annual capacity for formula base powder, half of it going into cans.

Norwood says the firm is awaiting final clearance from NZ and Chinese authorities before starting production in earnest. A grand opening on November 6 will be attended by Yashili bosses from China.

Norwood says Yashili is pleased with the new plant, which will employ 125 at peak production.

“New Zealand’s high reputation and quality in manufacturing dairy products was the reason Yashili chose us as the location of its first plant outside China. People trust New Zealand dairy products.”

Work on the plant started three years ago; Pokeno was chosen as the site due to close proximity to the ports of Auckland and Tauranga.

Yashili imports 60-70% of its ingredients for making infant formula powder from Europe; all its products are exported to China, making contact with ports important.

Imported ingredients are offloaded at the port of Auckland then transferred to Tauranga’s inland port for trucking to the factory. Finished products will be exported from Tauranga and Auckland.

The plant has the capacity to process fresh milk but there are no immediate plans to do this, says Norwood.

The project has been a major boost to Pokeno and the national economy.

Norwood says it’s a project of national significance in its size and benefits to the NZ economy.

“The wages we pay, the power, gas and materials we purchase, paying for freight and handling… they all contribute back to the NZ economy.

“In dairy terms this would one of the single biggest added value projects under-taken.”

He worked for Kiwi Dairy Co-op and NZ Dairy Group before the formation of Fonterra.

He served as chief executive of Westland Milk and worked for Fonterra in manufacturing roles in Venezuela, Mexico and Chile.

Norwood and a Chinese national were the first two employees hired by Yashili for the project three years ago.

He says it’s been an honour working on a project of this size.

On the current dairy downturn, Norwood believes it is “just a cyclical thing”.

“I really feel for farmers; on top of a low payout they are now getting cold wet spring which is depressing milk supply. It’s just not easy out there.”