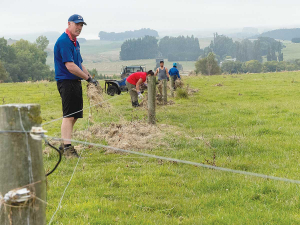 A school in Gore has lent a hand in the Southland clean-up effort.

When Dairy News visited, Darren Jack, deputy principal of Gore’s co-ed Catholic secondary school, St Peter’s College, was mucking in with a vanload of about a dozen of his students, clearing debris from fences on a dairy farm bordering the Mataura River a few kilometres south of Gore.

Jack says it’s important for the school “to put into action what you what you say you’re all about, which is community and compassion and caring.”

The flood had swept through the farm’s lower paddocks. Even where it didn’t break the wire the debris was wrapped around them and needed to be removed before the electric fencing would work again.

“The cows will go through it so we need to get it up and running,” said Jack.

“It’s a slow laborious job but it’s got to be done.”

Wednesday was the first day for the St Peter’s students to get out on the job, because the school first had to get parents’ consent.

“Now that we’ve got that start we’ll be able to carry that on for a few days at least, depending on need really. If we’re needed, then we’ll do our best to be available,” said Jack.

Farm manager Kyrie Romero said the fences were broken by silage bales swept down from another farm upstream.

Romero said his herd of 420 cows was “fine” and able to graze on the untouched front paddocks bordering the Gore to Invercargill rail line. However, production had dropped from 8000 litres to 6000 litres because of the disruption. The animals were stressed and didn’t like eating silt-covered grass, he said.