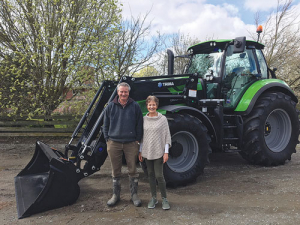 Ross and Averill Smart have relied on Deutz Fahr tractors to help run their Mid Canterbury cropping farm for the past 35 years.

Ross and Averill Smart have relied on Deutz Fahr tractors to help run their Mid Canterbury cropping farm for the past 35 years.

The Smarts farm on the flat land of Mid Canterbury between Rakaia and Methven.

During autumn/winter the farm fattens about 2200 lambs that arrive after harvest and are all gone by September.

The Smart family, third-generation farmers, arrived there in 1981 and by 1983 Smart had bought his first Deutz Fahr. This air-cooled, 5-cylinder DX 85 still does active service, mostly light duties such as powering an auger at harvest time.

Today’s main workhorse is a DF 6165RC that arrived in September 2017 to replace a M600 and now shows 600 hours use. The 171hp machine pulls a 7.2m, 50 spring tine Sunshine cultivator, a 24-run disc drill, a Kverneland 6-furrow Vari-Width plough over the potato ground and a 10-disc KV mower in the grass seed operation.

“The tractor has a little more power than we probably need,” Smart says of its having replaced the 140hp M600. “But our philosophy is to have one tractor capable of all the jobs on the farm.”

The tractor bears stunning modern design by Giugiaro of Italy and the latest technology from Germany. The 6-cylinder Deutz engine meets Tier 4 (final) emissions regulations, and achieves industry-leading fuel consumption, constant power from 2100 to 1600rpm and – importantly – constant torque from 1900 down to 1100 engine revs.

Add to this a long-travel front suspension set-up with anti-rise and anti-dive, 50km/h capability and a suspended cabin and this is really a great package.

“Many older farmers claim that tractors are getting too complicated and high-tech,” Smart says. “The 6165 offers the best of both worlds; whether you choose to use the automation or control the tractor manually, either way it’s easy to use.”

He has proven this: once shown how to use the headland management functions he soon used them. So much so that he is now speaking to the dealer to retro-fit an auto-steering system to further improve productivity.

Smart succinctly sums up the choice of Deutz Fahr: “It was an easy choice; we’ve had Deutz on the farm since 1983. They perform extremely well and are well supported by a great team at our local dealer Power Farming Ashburton and nationally by Power Farming NZ.”