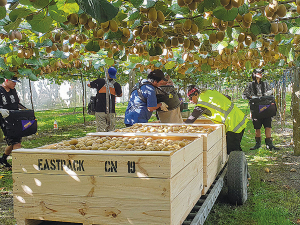 “If you ring them up and you are available to work particularly in Te Puke we will sign you up. You can work tomorrow,” he told Rural News.

Franks says they are well short of labour.

“We have probably got 400-500 RSE workers that aren’t here and they are really experienced people that have been working for us for a long time. Typically they were working nightshift, graveyard or work through the night to get fruit packed.

“So not only are we missing a number of workers, but also experienced people who have been doing the job for 10 years.

But for all positions “we still need a lot more people”, he says.

With almost all 2,900 orchards picked, the country's kiwifruit harvest is now largely complete, according to the New Zealand Kiwifruit Growers Incorporated (NZKGI).

For kiwifruit grower and exporter, Seeka growth is part of the listed company's DNA.