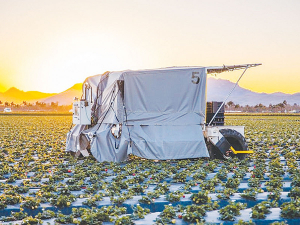 Yamaha Corporation has recently invested in Advanced Farm Technologies (AFT), a Californian company that is active in robotics.

Yamaha is made up of two separate companies - Yamaha Corporation, famed for musical and electronic products, and the Yamaha Motor Company, which started producing motorcycles in 1954.

The larger corporation first became involved in robotics in 1981, generally with machines to automate production lines. After a hesitant start, this developed into large numbers during the mid '80s.

Looking to use its expertise and experience in the agricultural sector, Yamaha Corporation has recently invested in Advanced Farm Technologies (AFT), a Californian company that is active in robotics. It has developed machines for harvesting soft fruit in the field, including an automated strawberry harvester that straddles the raised beds where the crop is grown.

Meanwhile, the Yamaha Motor Company is undertaking a joint development programme with a software company called 'The Yield'.

This company primarily deals with data collection, then the management and presentation of information in a format designed to aid the running of vineyards.

Meanwhile, bringing automation ATVs, including managing their deployment, would be a logical next step for YMC.

YMC also developed a remote-controlled helicopter in the 1980s, at the request of the Japanese government, to make the spraying of rice crops safer and more efficient. Today, it boasts that one third of the rice for the Japanese domestic market is treated by its aerial platform.

Closer to home, YMC has invested $10 million in Robotics Plus, a New Zealand company that produces post-harvest robotics for fruit packing, orchard robotics for harvesting and pollination, and autonomous agricultural vehicles.