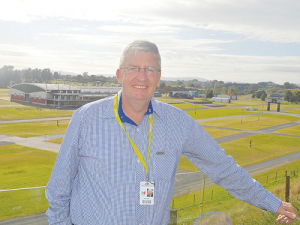 As the New Zealand Agricultural Fieldays gets underway this week the chief executive of the organisation running it says there is optimism in the dairy sector.

Peter Nation says while the last two seasons have not been good for the dairy industry, he senses things are looking up for the sector. He points to positive stories in the media and the industry producing innovative new products, notably the mozzarella cheese made by Fonterra.

“Comparing it with last year, we now have a tick in front of the dairy payout, sheep and beef are ok and overall the agricultural industry is in pretty good shape compared with what it was twelve months ago.

“It’s obvious that in the ag industry a bit of adversity makes them very quick at being able to think on their feet and look for improvement. We have seen this with kiwifruit, wine and pipfruit and it’s the same with the dairy industry.”

Nation says there is a lot of interest from overseas: of the 20 countries attending, eight have their own sites including the Chinese, Irish and British.

“UK Trade and Investment is back after nearly 17 years absence as an exhibitor. In the early days they had their own pavilion. We met with them last year in the UK and managed to lure them back. They seemed to be keen to reach out to this part of the world,” Nation says.

China is bringing two trade delegations – one farmers and the other agritech people. Also coming is the general manager of DGL which runs a huge agritech event in Hanover, Germany. Nation says the DGL representative has heard about Fieldays and now wants to see it for himself with a view to the two organisations working together.

“Last year we signed an agreement with the organisers of the National Ploughing Championships in Ireland to formalise our cooperation. With our blessing they have modelled their innovation centre on ours. In the long term we could end up sharing our innovation entries which would be great,” he says.

Nation says all this activity points to the fact that Fieldays is now recognised worldwide as a major agricultural event. 300 media from NZ and other countries will attend.