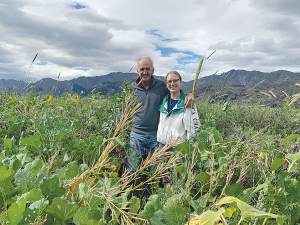 Greer Manderson with her dad Bryce.

You might say that lime runs deep in Greer Manderson's bones.

Her grandfather Jim started Whangarei's Avoca lime business just after World War II and her dad Bryce still runs it. Twenty-two-year-old Manderson has done a couple of seasons with Avoca and her younger brother Hamish works there as well.

However, now her attention has turned to the science of lime. After having completed Honours at Lincoln to a BSc (Biological and Environmental Sciences) at Canterbury University, she reckons lime has become neglected as a soil conditioner and nutrient.

Manderson did some of her honours study on the contribution that lime makes to addressing soil acidity, how it impacts legumes (with specific reference to white clover or lucerne) and what role liming has to play in the context of New Zealand soils.

She wants to look at the effects and benefits of liming - especially as its use appears to be declining in New Zealand. Having finished her final term at university, Manderson is now looking to make a career as a soil ecologist.

Her interest may have started being part of a lime quarrying family, but it all clicked in early 2020 after her father Bryce flew down to take her to a presentation by Dr Christine Jones. This internationally-renowned and highly respected groundcover and soils ecologist has spent much of her life working with innovative landholders, implementing regenerative land management practices that enhance soil health and subsequent ecosystem functioning, e.g. biodiversity, productivity, water quality.

The fact that lime is a natural product and can contribute to regenerative practices lit the fuse for her.

"My big interest is supporting regenerative agriculture," she says.

Manderson explains how the main purpose of lime applied in New Zealand is to reduce soil acidity - and in the process - adding calcium to the soil, a critical plant nutrient.

"I've been brought up knowing the importance of it. Now I'm passionate about getting messages across that lime is a natural substance, extracted from the ground," she adds. "Everything starts in the soil."

You can bet the benefits of lime will pop up from time to time. It's in her bones.

Bryce Manderson has worked with the Aggregate and Quarry Association to launch a NZ Limestone Producers Association to help promote the use of limestone and provide information about the benefits of its use.

Limestone producers around the country have formed a new national organisation to represent their interests and get farmers re-focused on the critical need for lime on New Zealand pasture.

Shaun Cleverley is the inaugural chair of the NZ Limestone Producers Association, which will work as a division of the Aggregate and Quarrying Association, AQA.

He says it makes sense for the lime industry to pool resources and work together.

"The driving force is about 70-80% of our ad spend is on promoting the use of aglime, rather than our particular product over a competitor's.

"Our industry's opportunity is to now have a body to produce and coordinate a lot of the content and science, which many of use have been doing alone, often simultaneously."

Limestone quarries produce towards 10% of all quarried materials in New Zealand. Cleverley says production and sales have been reasonably consistent in recent years but farming has become more intensified which requires more inputs including aglime.

He says that there is a direct correlation between grass or crop growth and the need for agricultural lime.

"Every farm will have an element of pH correction required, relative to their production."

Part of the new organisation's pitch is that lime is a natural product, sourced from the earth.

Time for lime to shine

New Zealand's lime industry is pointing to the benefits of locally extracted product to help farmers deal with huge increases in fertiliser prices.

Dairy not all bad

An agribusiness consultant and former banker, David Jones, says the so-called ‘dairy crisis’ is not ‘armageddon’.