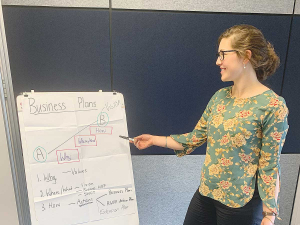 RMPP Action Network facilitator Genevieve Steven says you have to enable a safe environment for people to share and build trust with others.

Cleland, who farms sheep and beef cattle at Springfield in Central Canterbury, is part of an RMPP Action Group focused on members better understanding their farm finances and lifting productivity.

The RMPP Action Network model supports small groups of seven to nine farm businesses to work together to explore ideas and share expert resources to help them to make positive changes on-farm.

Cleland says that facilitation is the key to the success of the programme and without facilitator Genevieve Steven, the group he is part of would not have experienced the progress it has.

“It’s been really good because of Genevieve. She does an excellent job of drawing out everyone’s ideas and making us accountable.”

Steven, who works as a rural advisor with KMPG and facilitates four action groups in Canterbury, says making sure all members’ voices are heard is a key part of her role.

“You need to be very organised. Farmers are very busy so ongoing facilitation and contact helps keep them on track. You need to be a good listener, to be able to engage, be confident and comfortable bringing people together and getting them on the same page and heading in the same direction,” she says.

“You also need to be able to put yourself out there to get the best outcomes. You do need to hold your members accountable and challenge them to go beyond their norms.”

Steven formerly worked for ANZCO and was involved with the RMPP pilot programme for the Action Network. She worked with three groups with ANZCO and was then instrumental in pulling together several new groups after joining KPMG.

“From the outset, you have to enable a safe environment for people to share and build trust with other people,” she says. “You are bringing together people who may not necessarily know one another. I deliberately work to get a good mix of ages and experience, to encourage that diversity of thought and sharing.”

North Canterbury sheep and beef farmer George Fox, a member of one of Steven’s other action groups, agrees that having someone to ‘organise’ their group has been critical to its formation and success.

“There are nine farm businesses in our group. It would be very hard for us to organise the events,” he explains. “We might be able to arrange a day to meet but Genevieve works to get that extra 20% out of everything we do. She is an awesome facilitator and very good at engaging us all.”

AgFirst consultant Tafi Manjala facilitates three action groups in Northland and says a key role of the facilitator is to bring out of the farmer group. He adds this includes the knowledge, principles, practices and tools to demonstrate what ‘good’ looks like and help motivate farmers to action in their businesses.

“Farmers are more motivated to change when they see and hear it from other farmers,” Manjala adds. “A key part of facilitation is having that mix of experience in the group and bringing out those conversations, so they get the most from what other group members or the subject matter expert is sharing.”

His groups’ areas of focus include increasing pasture and crop eaten, succession and back to basics.

“A lot goes into organising and preparing for each action group day. You need to prime the farmers ahead so they know what activity they will be doing and what preparation they need to do for that meeting,” Manjala explains.

“For instance, if we are looking at managing drenching using faecal egg counts, then I would ask farmers to bring test results that relate to their farm so discussion can be relevant to what they individually need to do when they get back on farm.”

He believes the key to making it work is to agree on actions farmers are willing or need to take after the meeting and starting the next meeting by re-visiting how they went.

“It’s a sharing session, to discuss any barriers they’ve faced and share experience and advice. That also means there aren’t a lot of further discussions about that during the day, so we can focus on the current meeting’s topic.”

Fraser McKenzie, director of Oamaru-based McKenzie and Co chartered accountants and business advisors, facilitates one action group and is involved with four others facilitated by the company’s general manager Michelle McLean.

“As a facilitator, you have to be passionate about people and actively want to assist them to learn and change,” he explains. “You also need the ability to be impartial. You can’t go in with preconceived outcomes – you have to let it flow.”

“RMPP has developed a very good process, you need to trust it, and we are yet to see it not work. A lot of what we do is ‘Tell us what you want to know’ and we’ll provide the tools for that learning. Pre-work is important.

Meanwhile, Cleland says his experience is that friends in non-facilitated groups are simply not getting the results his action group is experiencing.

“I was talking to a friend and he’s in a discussion group which doesn’t have a facilitator and they don’t really have any direction. They go to each other’s places and have a chat and a few beers. I said, ‘You need to get on to RMPP and get yourself set up as an Action Group – with a facilitator.”

B+LNZ is adopting the action group extension and adoption model into its business to help support the delivery of B+LNZ's 'Farming Excellence Strategy' to ensure all sheep and beef farmers have the opportunity to benefit from the success of the RMPP Action Network small group learning approach. As a result, the programme will be supported beyong the end of RMPP.