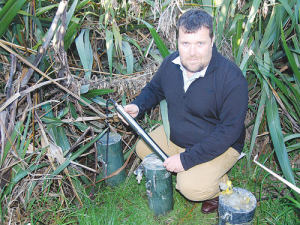 Lincoln Agritech group manager environmental research, Blair Miller, holds a prototype of Agritech’s real-time optical nitrate sensor beside the sampling bores at the Lincoln University Dairy Farm that have been used in the device’s development.

The Lincoln University-owned R&D company says that, as NZ moves to adopt caps for nitrogen losses to waterways, it “remains unclear” how levels would be reliably measured. Current approaches are based on modelling rather than direct measurement, largely because present real-time sensors are too expensive.

But Lincoln says its sensor should retail for no more than $US5000 and deliver data with accuracy and calibration consistency similar to high-end sensors retailing for $US15,000 - $US30,000 each.

The sensor is housed in a slim cylinder with a single hole through the middle; water flowing through the hole is analysed by shining various wavelengths of light across the flow.

Agritech’s group manager environmental research, Blair Miller, says the device works by measuring the transference of UV light at 220 nanometres wavelength, which is absorbed by nitrates. Other wavelengths detect and correct for factors such as dissolved organic carbon and turbidity from silt.

He says other, more expensive, optical sensors are designed primarily for the wastewater industry and are more complex, having to measure a far greater range of targets and contaminants.

“We’ll never sell this as a wastewater sensor; but this will go down a dairy farm well anywhere in NZ, within reason,” says Miller.

The other devices are also “much fatter”, while theirs is specifically designed to fit in a 50mm bore, which can be direct-driven rather than expensively drilled.

The included electronics allow for easy connection by landline, wireless or cell network, which will also help keep deployment costs down.

Rekker’s data shows that both the MAR and the new sensor are working as planned. Nitrate concentrations in downstream groundwater are markedly lower, and the sensors’ continuous data correlates well with the nitrate measurements from conventional sampling.

Rekker says the ‘utes and boots’ practice of having a person physically drive out to take a sample which then must be analysed in a lab to get a paper report three weeks later, is “an expensive snap-shotty way of collecting data”.

“We know, especially in the flow field, how much richness that automated data collection provides for us.”

Lincoln Agritech chief executive Peter Barrowclough says the sensor’s ability to vastly increase the amount of data available for decision-making in the whole community will be “huge”.

“We don’t know exactly, yet, how it’ll be used in all circumstances. But we’ve got science programmes running alongside it.

“We’ll sell this to people like DairyNZ, regional councils and NIWA. So they’ll all learn from having more data, so over time we’ll have a much richer data set from which to make better-quality decisions.”

Miller says Overseer “finishes” at the bottom of the root zone but a lot of farmers would have natural assimilative capacity for denitrification below that, which the sensors could demonstrate.