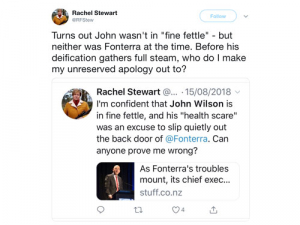 Following news of Wilson's death, Stewart tweeted last week, “Turns out John wasn’t in “fine fettle” - but neither was Fonterra at the time. Before his deification gathers full steam, who do I make my unreserved apology out to?”

Melissa Clark-Reynolds, who follows Stewart, says she liked the “apology” Rachael Stewart tweeted last week. She liked a further tweet by Stewart, "I normally never drink 'mother's ruin' but, given a day of heat as I've never felt before in NZ, I'm about to pour a Rogue gin, with tonic, ice and lime. Thought For The Day: Even when you apologise, some people will never accept it. Why? Because they just don't like you. CHEERS!"

An independent director, appointed by the BLNZ board, Clark-Reynolds has refused to apologise to farmers for her thoughtless action, but concedes Stewart’s initial tweet about John Wilson’s was “atrocious”.

“I liked the fact that she apologised last week.”

BLNZ chairman Andrew Morrison was asked if Clark-Reynolds – who is paid $33,000 a year by meat levy payers, many of them Fonterra shareholders – should apologise to dairy farmers, most of them also BLNZ levy payers.