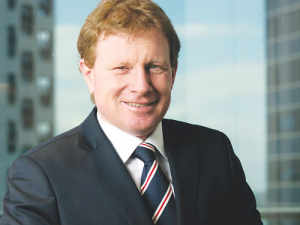 Facebook and Twitter users are urging Rachel Stewart to apologise to Wilson’s family; some are calling on NZ Herald to sever ties with the deliberately antagonistic columnist.

Wilson died last week and was farewelled by his family and friends at the weekend in Hamilton.

After Wilson had stepped down as Fonterra chairman in July last year citing health reasons, Stewart tweeted that “I’m confident that John Wilson is in fine fettle, and his ‘health scare’ was an excuse to slip quietly out the back door of Fonterra. Can anyone prove me wrong?”

Following Wilson’s death, Stewart’s original tweet resurfaced with calls for her to apologise to Wilson’s family.

Stewart, known for her anti-farming views, tweeted last week, “Turns out John wasn’t in “fine fettle” - but neither was Fonterra at the time. Before his deification gathers full steam, who do I make my unreserved apology out to?”

However, there was no apology from Stewart on Twitter.

“They’ve lost a husband, father, brother and on the day you were asking to be proven wrong they were dealing with learning he probably wouldn’t live much past Christmas,” he replied to Stewart.

Lawyer Emma Marr was scathing in her reply.

“Have you ever thought about being gracious and attempting to look genuinely sorry about a truly horrible comment you made? The man was dying. Your comments, then and now, couldn’t have been more ill-judged.”

On Rural News’ Facebook page, David Clark had a message for NZ Herald. “It is long overdue for the NZ Herald to bring an end to Rachel Stewart’s personal vendetta against the NZ agricultural sector and she should most definitely be sacked for her misjudged tweet.”

Contract milker Brandon Law posted that it was “a cold-hearted mongrel thing for her to say”.

“Her comments are testament to her quality of character.”

Meanwhile, Stewart has taken umbrage at Rural News for pointing out her insensitive, nasty comments about Wilson and the impact on his friends and family. She accused this newspaper of being “low life scumbags” and “assholes”.