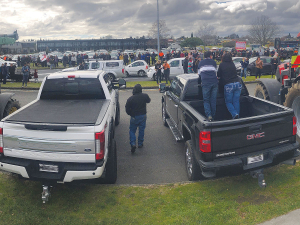 The Government has pushed out the Introduction of its new 'Ute Tax' until April 1 2022 - April Fool's Day!

The delay - from the original January 1 date - was announced by Minister of Transport Michael Wood.

"The rollout has been delayed because of the disruption caused by the current Delta outbreak," he claims.

This is despite the unworkability of the scheme that has been identified by the motor industry and users like farmers and tradies. Many in the vehicle sector also point out that Delta is actually the reason for increased production costs, monumental rises in shipping costs and long delays in product landing in New Zealand.

News of the delay comes as the Land Transport (Clean Vehicle) Amendment Bill passed its first reeding in Parliament on September 21. This will smooth the way for the clean car standard, alternatively called the fuel economy standard, in addition to clean car discounts.

The Bill passed its first reading by 77 votes to 43, supported by Labour, the Greens and Te Pati Maori, while opposed by National and the ACT Party.

National's spokesman for transport David Bennett has described the scheme as a "tax grab" that will hurt the hard working and vulnerable New Zealanders the hardset. "The Bill is just a pipe dream that has illusions how the market works."

Bennet says it adds many costs and details as yet unknown to the motor industry and users.

ACT Transport spokesman Simon Court described the bull as "virtue signalling nonsense" and said "it will see the Government, yet again, dip into Kiwis' back pockets".

Court claims that while intended to lower NZ's carbon emissions, the policy will fail to deliver.

The Motor Industry Association (MIA) says the Bill is unrealistic.

"By setting standards that are so steep over a short timeframe, distributors of Battery Electric Vehicles (BEV's) are the only ones ever likely to comply, while at the same time putting NZ out of step with comparable countries," It says.

The MIA further claims that the Government appears to have overlooked the fact that manufacturers do not produce models solely for the NZ market, which is relatively small in the case of global volumes.

"Rather they manufacture for key markets like North America, Europe and Australia where volumes are much greater and emission standards less oppressive."

The industry estimates that the combined costs of fees and penalties, under the scheme, is likely to add between 15 and 20% to the cost of new vehicles.

"This creates the likelihood that people will hang onto older vehicles for longer, suggesting that the Government doesn't fully understand its own climate change policies, or is just trying to implement another sneaky revenue grab."